The marquee event of Winter Olympics skating, the ladies’ event, got off to a dramatic start Wednesday as overnight sensation Yulia Lipnitskaya of Russia went head-to-head with the reigning Olympic champion, Queen Yuna Kim of Korea.

In the confrontation between experience and exuberance, years and youth, experience proved the victor. Kim, who has only skated at two events this season due to injury, took to the ice in Sochi and floated through her program as if no time had passed since her record-setting, gold-medal winning routines in Vancouver four years ago. Earning 74.92 points for a quiet, lyrical program set to Send In the Clowns, the Korean wooed the judges with her trademark presentation, outscoring the 15-year-old Lipnitskaya on skating skills, transitions and timing.

Lipnitskaya, skating hours after the Russian men’s hockey team failed to earn a spot in the medal round, finally showed some of the strain from the international and national attention she received following her stellar skating in the team event. She fell on her triple flip, which cost her an automatic one point deduction and lowered her technical score for the jump. Showing her age, the teen couldn’t hide her disappointment, refusing to look up in the kiss and cry when her scores came up.

Her teammate, Adelina Sotnikova, who before Lipnitskaya stole the stage was Russia’s rising star, emerged from the younger teen’s shadow to plant herself in second with an inspired skate to Bizet’s Haanera.

Italy’s Carolina Kostner, who at 27 is among the oldest competitors in the field, enthralled with a balletic performance to Ave Maria to finish in a surprise third place.

But perhaps the biggest shock of the night came from Japan’s Mao Asada, the silver medalist from Vancouver and the only woman performing a triple axel. Asada, who made history in 2010 as the first woman to land two of the forward-take off jumps in Olympic competition, hasn’t landed one this season, and continued the streak in Sochi. Her fall, and turning another triple jump into a double, cost her precious points; she finished 16th among the 30 skaters.

Americans Gracie Gold, Ashley Wagner and Polina Edmunds and all skated clean programs to finish fourth, sixth and seventh, respectively, which puts them in good position to move on to the podium. Gold was slightly more tentative than she was at nationals, and admitted to being more nervous about skating the short program, which contains eight required elements, than the free program. 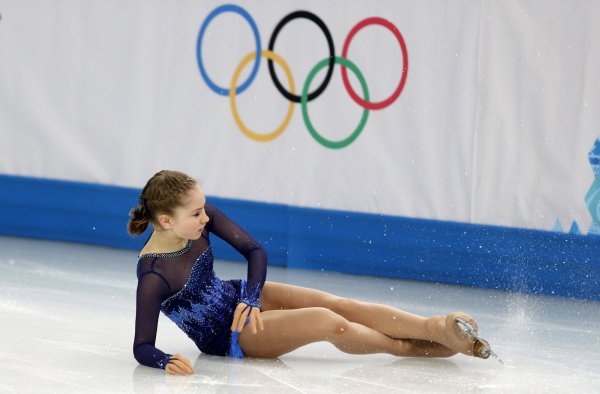 Russian Figure Skater Takes a Fall, and More Surprises from the Ladies Short Program
Next Up: Editor's Pick