The Best and Worst Foods for Bloating

Let’s talk about something uncomfortable: gas and bloating. Most of us pass gas anywhere from 12 to 25 times a day, according to Brigham and Women’s Hospital, and surveys show that abdominal bloating affects up to 30% of Americans. “Having a perfectly flat stomach all the time isn’t normal,” says Health contributing nutrition editor Cynthia Sass, MPH, RD. “After you eat and drink, food and liquids take up space inside your stomach and intestines, and that means some expansion.”

A ballooned belly doesn’t necessarily indicate that something is wrong with what you eat, but if your abdomen is too swollen to squeeze into your jeans, you may want to identify the belly bloaters in your diet.

Worst: Broccoli, cabbage, kale
Kale, broccoli, and cabbage are cruciferous vegetables, which contain raffinose — a sugar that remains undigested until bacteria in your gut ferment it, which produces gas and, in turn, makes you bloat. But don’t shun those healthful greens just yet. “Consistently eating nutrient-rich, high-fiber foods leads to having a stronger, healthier digestive system that’s less prone to bloating,” Sass says.

So keep eating the green stuff, but keep your portions in check. And if you absolutely can’t part ways with even a gram of your kale, steam it: “Cooking any vegetable softens the fiber and shrinks the portion as some of the water cooks out, so it takes up less space in the GI tract,” Sass says. It won’t eliminate or prevent bloating altogether, but it may make your veggies easier to digest.

Worst: Legumes
It’s probably not news to you, but beans, along with lentils, soybeans, and peas are gas-causing foods. These little guys are basically bursts of protein in a pod, but they also contain sugars and fibers that our bodies can’t absorb. So when legumes reach the large intestine, your gut bacteria take the lead and feast on them. This process leads to gas and can balloon out your waist.

Combine legumes with easily digestible whole grains, like rice or quinoa. Your body will eventually get used to them. “If you eat fruits, veggies, nuts, whole grains, and beans often, they won’t bother you as much as if you eat them sporadically,” Sass said.

Worst: Dairy
If you feel gassy after a few slices of cheese or a bowl of cereal with milk, you may be lactose intolerant, which means your body lacks the necessary enzymes to break down lactose (the sugar found in dairy products). That can cause gas to form in the GI tract, which may trigger bloating.

So before all that gas gets to you, steer clear of dairy products and opt for the many lactose-free or nondairy alternatives out there. The American Gastroenterological Association (AGA) also suggests the use of lactase tablets like Lactaid, which help people digest foods that contain lactose.

Worst: Apples
An apple a day may save you a trip to the doctor’s office, but it does not keep the bloat away. High in fiber, apples also contain fructose and sorbitol, sugars found in fruits that many people can’t tolerate, Sass says. The result? You guessed it: gas and the inevitable puffy feeling.

Apples are a great snack, however: One fruit provides an average of 4.5 grams of protein and around 10% of your daily vitamin C requirement, so don’t give up on them altogether. “Eating apples specifically has been linked to a lower risk of heart disease and respiratory problems, including asthma, bronchitis, and emphysema,” Sass says. Eat them in moderation and separately from meals, and time your eating right: “If you’ll be wearing a form-fitting outfit or bathing suit, you might not want to reach for an apple,” Sass says. Other fruits that bloat: pear, peaches, and prunes.

Worst: Salty foods
Eating high-sodium foods can trigger water retention, which can balloon you up, Sass says. Avoiding sodium isn’t as simple as steering clear of the saltshaker, however. The CDC reports that about 90% of Americans consume more sodium than is recommended for a healthy diet (2,300 mg per day for most people, and 1,500 mg for adults over 50, and people with diabetes, high blood pressure, and high risk of hypertension). Sodium sneaks its way into most processed and packaged foods, including soups, breads, and these other surprisingly salty foods. That makes it very difficult to avoid. When and if you do succumb to salt, drink a lot of water to help flush it out.

Health.com: 13 Foods that Are Saltier Than You Realize

Best: Cucumber
People use cucumbers to reduce puffiness under their eyes—and you can eat them to do the same thing for your belly. The vegetable contains quercetin, a flavonoid antioxidant that helps reduce swelling, says Sass.

“Cucumbers have been shown to inhibit the activity of pro-inflammatory enzymes,” she adds.

So slice it up and eat it as is, or swap sugary drinks with a glass of cucumber water.

Best: Bananas
Foods rich in potassium—like bananas, plus avocados, kiwis, oranges, and pistachios—prevent water retention by regulating sodium levels in your body and can thus reduce salt-induced bloating. Bananas also have soluble fiber, which can relieve or prevent constipation.

“Bloating can also be caused by constipation,” Sass says. “If you’re not able to eliminate waste in the GI tract, you become ‘backed up’ so to speak, which can lead to a bloated look.”

Best: Papaya
The enzyme contained in papaya (papain) helps break down proteins in your GI system, which makes digestion easier. Sass says that the tropical fruit also has anti-inflammatory properties, as well as fibers that support a strong digestive tract.

Eat papaya whole and fresh or blended into a smoothie

Best: Asparagus
Asparagus is an anti-bloating superfood. Sure, it makes your urine smell, but it also makes you pee, period—helping you flush all that excess water, thus relieving any discomfort and bloat.

It also contains prebiotics, which help support the growth of “good” bacteria, according to Sass. This helps maintain a healthy balance in your digestive system to prevent and/or reduce gas.

Best: Yogurt with probiotics
Get some of those good bacteria into your gut! Called probiotics, they help regulate digestion and champion the overall health of your digestive tract. Sure, you can take probiotic supplements, but you may as well get a breakfast out of it.

So eat your bloat away with a yogurt that has active cultures. You can sweeten it with a little honey, jam, or granola.

Best: Fennel seeds
Fennel is a digestive tract savior. The seeds have a compound that relaxes GI spasms, which allows gas to pass and relieve bloating, says Sass.

You can find fennel and fennel seeds in breads, sausages, and other meat dishes. You can also chew on the seeds directly or sip on a fennel tea at the end of a meal.

Best: Ginger
Ginger is a go-to home remedy for colds, achy muscles, cramps, and seasickness. Add bloating to the list—ginger is a natural anti-inflammatory and an all-star digestive aid. It soothes the digestive system and relaxes the muscles of the digestive tract, which can relieve bloating, Sass says. It also contains an enzyme that absorbs proteins, thus reducing protein-induced puffiness and gas.

Fresh ginger can be added to smoothies and salad dressings, and it adds tons of flavor to recipes like these. You can also make homemade tea.

Best: Peppermint and chamomile tea
If you’re feeling stretched out after dinner, you can sip on a hot cup of peppermint or chamomile tea. Both kinds relax GI muscles to help dissipate the gas that causes your stomach to bloat. Aside from improving digestion, chamomile can also soothe and relax, which can help ease any sort of stomach discomfort. 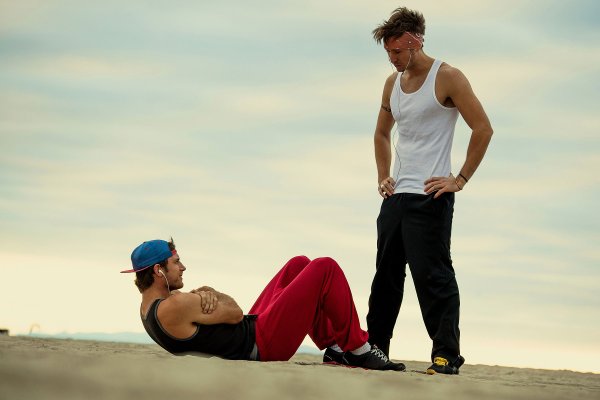 The Best Kind of Sit-Up Is What You Think It Is
Next Up: Editor's Pick