Bob Schoelkopf, right, director of the Marine Mammal Stranding Center, looks over a minke whale that washed up along with a common dolphin, in foreground, in Atlantic City, N.J., Thursday, May 1, 2014.
Vernon Ogrodnek—AP
By Denver Nicks

The whale was discovered Thursday morning covered in purple graffiti that appeared to be the Greek letters Tau Epsilon Phi followed by the number 94. Several schools in the area host fraternities named for the same Greek letters.

At more than 12 feet long, disposing of the whale is proving contentious in among Atlantic City’s beach community. The corpse was dragged from beneath the pier down the beach where authorities plan to bury it, which has some business owners worried about the stench of decomposing whale, the Press of Atlantic City reports. The whale washed up along with the corpse of a common dolphin. It’s not uncommon for the corpses of either animal to wash ashore in the area. 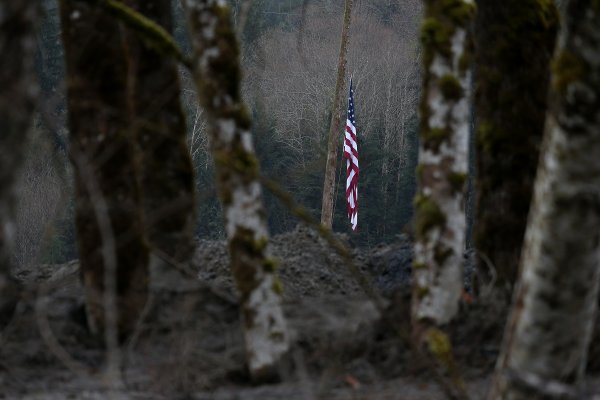 President Obama Will Survey Mudslide Damage 1 Month After Tragedy
Next Up: Editor's Pick