Russian President Vladimir Putin wants Ukraine to remove its military from the southeastern region of Ukraine where pro-Russian militants are fighting with Ukrainian troops. Putin expressed his demands to German Chancellor Angela Merkel on Thursday, the Kremlin said.

“Putin emphasized that it was imperative today to withdraw all military units from the southeastern regions, stop the violence and immediately launch a broad national dialogue as part of the constitutional reform process involving all regions and political forces,” the Russian government said in a statement.

Acting Ukrainian President Oleksandr Turchynov said on Wednesday that the country’s security service no longer has control over the region where armed separatists have taken government buildings. Rebels in Donetsk have declared a “People’s Republic of Donetsk” and called a referendum on secession for May 11, just before the planned election for President two weeks after. Meanwhile, the Ukrainian National Information Agency said that pro-Russian militants captured a police station and the state prosecutor’s office in Donetsk on Thursday, according to the New York Times.

Turchynov announced he would be reinstating military conscription on Thursday for men between 18 and 24 in an effort to restore public order.

Russia denies working with the separatists and says it has no troops in eastern Ukraine. However, Putin also said there was no Russian presence during the annexation of Crimea, then later admitted there was.

Meanwhile, Russia held its first large May Day parade in Moscow’s Red Square since the Soviet era. Workers cheered President Putin and many carried signs referencing Ukraine. “I am proud of my country,” one banner said, according to Reuters. “Putin is right,” another read. 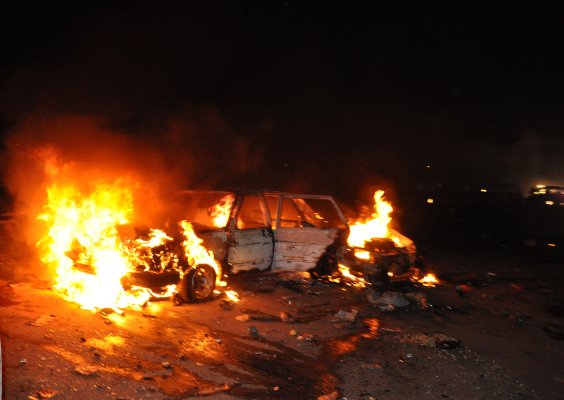 Blast in Nigerian Capital Kills at Least 19
Next Up: Editor's Pick