A fire crew uses their deck gun to cut down an aggressive branch of the Etiwanda Fire in Rancho Cucamonga, Calif., on April 30, 2014.
David Bro—Zuma Press
By Kate Pickert and Bryan Walsh

As he looks ahead to summer, firefighter Steve Abbott is worried about the down and dead. The term refers to the dry, lifeless leaves and branches that are explosive fuel for wildfires and which are more abundant in California this year thanks to an unprecedented drought that has gripped the state. “The combination of temperatures and fuel adds to our concern,” says Abbott, one of more than 500 firefighters now battling what’s known as the Etiwanda Fire in San Bernardino County east of Los Angeles.

The fire, which started on April 30, has burned about 1,600 acres and was 53 percent contained by Thursday evening. In addition to the drought conditions and temperatures that climbed above 90 in Southern California this week, fierce Santa Ana winds helped propel the blaze and prevented fire crews from fighting it from the air. Although the fire has not yet destroyed any structures, Etiwanda is effectively opening night for a wildfire season that fire officials say could be one of the most severe and dangerous on record—and a preview of what life in a hotter and drier world could be for Californians.

That’s because the Golden State is primed to burn. California is suffering through its most severe dry spell in decades, with the entire state now in some category of drought. At the beginning of May the snowpack level in the Sierra Nevada mountains—a key source of stored water—was just 18% of normal. This winter, meanwhile, was the warmest on record for the state. The drought and the heat mean that plants and trees haven’t grown as many green leaves as usual. Those leaves help trees maintain moisture—and without them, the plants are that much more likely to ignite in a blaze. And it might not even take a fire to kill some of these parched trees. “If you don’t have the vegetation receiving water, not only do you have lower humidity levels in the plants, but some of the trees will actually die,” says Carlos Guerrero, a Glendale, Calif. fire captain and a spokesman for the multi-agency unified command battling the Etiwanda Fire. Dead trees means even more fuel on the ground as the height of the summer wildfire season approaches.

Guerrero and his fellow firefighters are getting the Etiwanda blaze under control—the mandatory evacuation orders announced after the fire began on Apr. 30 were lifted by the next day. But the changing climate means that the threat from wildfires is likely to only increase in the months and the years to come, in California and in much of the rest of the West. A study published last month in the journal Geophysical Research Letters found that the number of large wildfires in the West had increased by a rate of seven fires a year from 1984 to 2011, while the total area had increased at a rate of nearly 90,000 acres a year. Since 2000 more than 8 million acres have burned during six separate years. Before 2000, no year had seen 8 million acres burned. The authors connected the increase to climate change, as did the researchers behind a 2012 study in Ecosphere that predicted that global warming would likely cause more frequent wildfires in the Western U.S. within the next 30 years. Even the most recent report from the Intergovernmental Panel on Climate Change, considered the gold standard for climate science, concluded that there was high confidence that global warming was already intensifying wildfires in the West.

Blame Climate Change for the Wildfires

Climate change isn’t the only factor behind the increasing wildfires in California and the West. Successful firefighting in the past has allowed some forests to grow beyond their natural limits, ironically providing more fuel for megafires. And the number of people who have moved to areas that border wild land has increased as well. Given that most wildfires are begun by human beings—either purposefully or by accident—more people near a forest means more chances for forest fires.

For people like Mia Hidayat, who lives in a housing development near the border of the Etiwanda Fire, that means the simple sight of dry brush and bushes in her neighborhood has taken on a new danger. “I’m afraid,” says Hidayat. As California’s wildfire season grows, many others are sure to feel the same.

Most Popular on TIME
1
TikTok Teens Are ‘Going to War’ Against the Trump App
2
With No End in Sight to the Coronavirus, Some Teachers Are Retiring Rather Than Going Back to School
3
Naya Rivera, Pioneering 'Glee' Star, Presumed Dead at 33 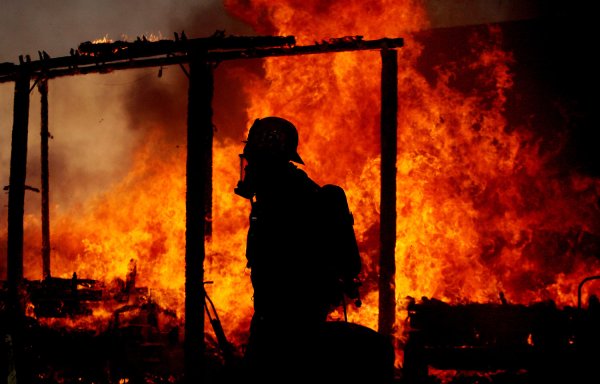