It's Time to Get Over the 'Miracle On Ice'

The U.S ice hockey team rushes toward goalie Jim Craig after their upset win over the Soviet Union in the semi-final round of the XIII Winter Olympic Games in Lake Placid, N.Y., Feb. 22, 1980.
AP
By Simon Shuster

Halfway through the Olympic Games in Sochi, Russia’s Foreign Minister got so fed up with all the bad press that he decided to take up his pen and react. “In the Western media,” Sergei Lavrov wrote in an op-ed published Thursday, Feb. 13, in Russia’s Kommersant daily, “a campaign of anti-Russian information has been launched, using terminology that is in the spirit of the Cold War.” Then, for nearly 2500 words, he went on to eviscerate the West for its old-think biases. But if he felt the media was beating the dust out of the Iron Curtain before, he should brace himself for this weekend.

On Saturday, Russia and the U.S. will face off in an Olympic hockey match that is, in some fairly superficial ways, reminiscent of the so-called “Miracle on Ice” – the epic game between the U.S. and Soviet Union (not Russia) during the 1980 Winter Olympics in Lake Placid, New York. In the American imagination, that game provided one of the defining narratives of the Cold War. A ragtag bunch of American college kids defeated the honed professionals of the Soviet hockey machine, who had dominated the Olympic hockey tournament for decades.

No less than three American films have been made about that upset, the first one only a year after the game was played and most recently the 2004 version from Walt Disney. It was a great story. But it has nothing to do with Saturday’s match. “Folks need to get over it,” says Vyacheslav Fetisov, the Russian hockey legend who, as a 21-year-old defenseman, played on the losing end of the Miracle on Ice. “There is really just no parallel to be made,” he tells TIME.

But at a press conference two days before the game, the members of Team USA had to deflect a stream of questions trying to tease out even the slightest parallel. “Look, guys, I wasn’t even born yet,” said T.J. Oshie, a 27-year-old center for the St. Louis Blues. “I’m not really a 100% sure on the history of all that.” But do you remember hearing about it, a reporter persisted, maybe from uncles or grandfathers? “Yeah, they talked about. But I was just a young kid,” said Oshie “I remember watching the movies.” So does the history come into play for the team at all, asked another American reporter. “You know,” said Oshie. “I really don’t think so.” It went on like that for half an hour.

In the professional sporting press, references to the Miracle on Ice have become a grating cliché, much more likely to inspire a cringe in the context of Sochi than a wistful stare into the distance. Gregg Krupa, who covers the Red Wings for the Detroit News, says that mentioning today’s political climate as some kind of motivator for any of the hockey players in Sochi would just be misleading.

During the Winter Games of 1980, the Cold War was at one of its tensest moments. The Soviet Union had just invaded Afghanistan. The United States was about to elect Ronald Reagan as President. The long period of detente between the two superpowers was being abandoned. “It was a Cold War game,” Krupa says. “Today, these guys all hang out in the States and Canada with each other, playing hockey and raising families together.”

Fetisov, now a member of the Russia’s upper house of parliament, was one of the players who broke down the barriers to make that possible. In the late 1980s, he began pushing the Soviet government to let him play in the NHL, and he was threatened in response with banishment to the Ukrainian minor leagues. Only when the Soviet Union was on the brink of collapse was he allowed to play abroad, and he went on to win two Stanley Cup trophies in a row for the Red Wings in 1997-1998. Following in his footsteps, most of the players on the Russian national team today also play for the NHL, including the team captain, Pavel Datsyuk, who also plays for the Red Wings.

“I don’t know what the comparisons are motivated by, but they just don’t make sense,” says Fetisov. “It’s a different game, a different world we’re living in. The Soviet Union is gone.”

That is the message that Russia’s government has been trying to get across in these Olympics, and many of the officials involved have said they are succeeding. Konstantin Ernst, who designed the opening ceremony, said afterward that it had shown, “the real Russians, untainted by decades of propaganda and the Cold War.” To drive home the point, President Vladimir Putin visited the American House in Sochi’s Olympic village on the eve of Saturday’s game.

So it’s little wonder that parallels drawn in the media between that game and the Miracle on Ice – and between Russia and the Soviet Union – have gotten officials so upset. It seems to have the same effect on some of the players in Team USA. “We’re just out there playing hockey,” says David Backes, captain of the St. Louis Blues. “Whether that solves any of the political tensions, I doubt it. But really what we want to do is write our own chapter on Saturday.” After 34 years, maybe they can even close the book. 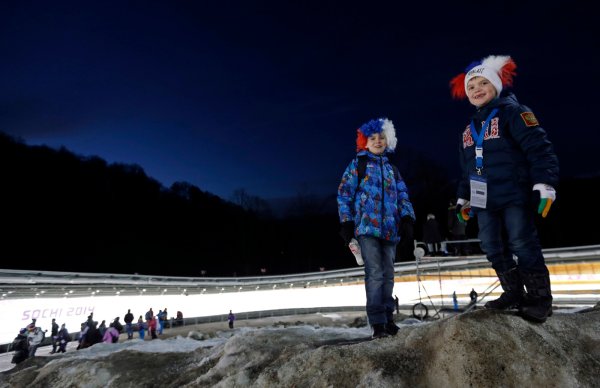 Russia Cancels Homework So Kids Can Watch the Olympics
Next Up: Editor's Pick