George Bush Wants His Brother Jeb To Run For President

Former President George W. Bush gave his younger brother Jeb his endorsement Thursday should he decide to run for the White House in 2016

“I hope Jeb runs,” Bush told CNN. “I think he would be a great president. I have no clue what’s on his mind and we will talk when he’s ready. I noticed he’s moving around the country quite a bit.”

“Hey Jeb, if you need some advice, give me a call,” Bush said.

The former governor of Florida has been speaking at events across the country advocating for education reform, as well as at Republican fundraising events. In March, Bush spoke to the Republican Jewish Coalition in Las Vegas at an event hosted by billionaire GOP mega-donor Sheldon Adelson. Bush would benefit from strong support from the party’s establishment and donor classes, but he will have to test whether the nation is suffering from Bush fatigue.

Earlier this year in an interview with C-SPAN, his mother, former First Lady Barbara Bush, said she hoped Jeb would decide against running. “If we can’t find more than two or three families to run for high office, that’s silly,” she said.

In the interview with Tapper, Bush said he’s confident his brother is not paying attention to the polls, even though they show him potentially leading the pack of GOP presidential contenders.

“He’s checking his core, and as he said publicly, ‘I’m thinking about my family,'” Bush said. “And of course, he knows full well what a run for the presidency can do on family.” 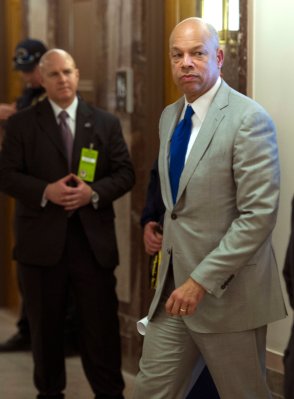 Congress Stalls on Bridge to Somewhere
Next Up: Editor's Pick