That’s the bottom line in an Army report that, in an effort to study the impact of women on the front lines, compares accident rates of men and women flying Army helicopters from 2002 to 2013.

The revelation is included in Army Major Seneca Peña-Collazo’s report, Women in Combat Arms: A Study of the Global War on Terror, which he published in May while a student at the School of Advanced Military Studies at the Army’s Command and General Staff College at Fort Leavenworth, Kan.:

Peña-Collazo, an AH-64 Apache helicopter-gunship pilot, suggests female Army gunship pilots can serve as a kind of petri dish on the issue of how female troops can perform on the front lines:

The data are interesting:

The report doesn’t hypothesize what might account for the different crash histories of the Army’s female and male pilots. The samples could be too small to make valid comparisons, or the female pilots may be less aggressive in the air, perhaps because they have less flying time.

There are also no details on whether or not commanders found female pilots as good as — or better — than their male comrades when it came to accomplishing their assigned missions. In any event, a sortie — especially in combat — that ends with the crew and aircraft safely back on base is a good thing.

Retired Army colonel Elspeth Ritchie, once the service’s top psychiatrist, doesn’t believe AH-64 crews with one or two females at the controls are being cut any slack that could lead to fewer accidents. “Pilots do not choose which missions to fly,” she says. “Their bosses choose the missions.” The key question is why flight crews with at least one woman on board have fewer crashes. “The obvious conclusion is that mixed [gender] crews are safer,” she says. “Why is the question. Less ‘cowboying’? More safety checks? More thoughtful behavior in the air? Or is this apparent pattern random variation?”

“The performance of women in combat is not a problem,” Peña-Collazo writes. “Both historically and more recently during the war on terror, anecdotal and statistical input conclude that women can and will continue to perform admirably in combat across a wide variety of jobs.”

The real problem, he argues, isn’t women but the military culture:

Chief Warrant Officer 2 Laura Tanski readies for a flight aboard an AH-64 at Fort Riley, Kan., in 2012.

Peña-Collazo discussed his gunship’s firepower with an Army interviewer in 2011. “The Apache has three different weapon systems on it; the first one is really for personal area suppression, and that’s the 30-mm cannon. That’s good until about 1,500 m or so, and it can engage out to 4,000 ft. We have rockets, 2.75 Hydra rockets; they are optimally good up to about 3,000 ft., but guys who shoot rockets well, at 1,000 ft. they can put it right through windows … Then we had the Hellfire missile; it’s a laser-guided munition, and from the first Gulf War they were hitting engagements out to 12,000,” he said.

You picked your gun depending on your target — but not always. “It’s very funny how that dynamic changed a little bit as we evolved through the war where collateral-damage estimates and rules of engagement became much more stringent,” Peña-Collazo recalled. “At that point, it was completely viable to use a Hellfire missile to take out one insurgent; they’re meant for an armored tank, but for one guy, $70,000 going off the rail, and I hope I hit him. You’d see engagements where guys were still running away because you missed.”

Fledgling Army pilots of both genders know the Apache is at the tip of the spear. “My intent has always been to get as close into the battle as possible,” AH-64 pilot and Chief Warrant Officer 2 Laura Tanski told an Army public-affairs officer in 2012. “I knew that the Apache was always right there in every mission.”

Peña-Collazo interviewed several of the Army’s top special-ops chopper commanders. “There is nothing about assigning females to a well-led unit which would adversely affect cohesion,” said Colonel John Evans, commander of the 160th Special Operations Aviation Regiment, the outfit that flew Navy SEALs to their date with Osama bin Laden in 2011. The 160th has allowed women to fly since last June.

Women have deployed in nonpilot roles with the 160th, known as the Night Stalkers, since 2003. “To the best of my knowledge we have had no sexual assaults or harassment complaints from our females during their deployments over the last 10 years,” Evans said. But he expressed concern that pregnancy could hamper females willing to endure the three years’ training needed to become a 160th aviator.

“A newly assigned female Night Stalker should, in my mind, make a mental commitment to forego any plan to start or increase a family for at least five to six years after assignment,” Evans said. “Given instances of unintended pregnancy, despite purposeful family planning, and the desire of many women to have their families during peak childbearing years, there tends to be a natural friction point created with consistent service as a Night Stalker and the building and nurturing of a family.” 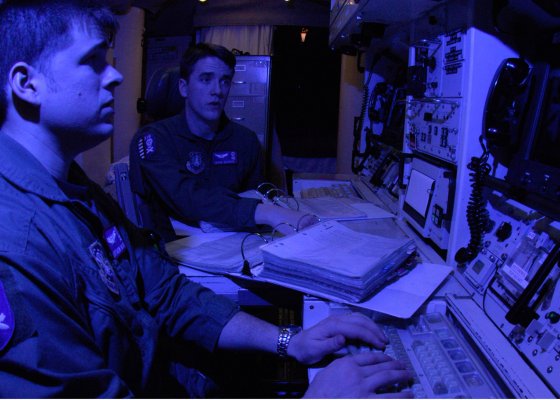 Are You Smarter Than a Nuclear Launch Officer?
Next Up: Editor's Pick