Kim Fugate looks in on Kristen, one of her four identical quadruplets.
University of Mississippi Medical Center
By Eliana Dockterman

A Mississippi mom has given birth to a surprise fourth baby while delivering what she had thought was a set of triplets. Kimberley Fugate learned of the surprise delivery mid-operation when a doctor told her, “there are more feet.”

The fourth baby had somehow hidden from the sonogram throughout Fugate’s pregnancy, serving up a big surprise to doctors and the Fugates on delivery day, Feb. 8.

Fugate was not planning on having more children at 42 — she and her husband already have a 10-year-old daughter — and was shocked to discover that she was pregnant with triplets last year.

But then she gave birth to identical quadruplets, an event so rare it has “almost incalculable” odds, Fugate’s doctor, James Bofill told the Clarion-Ledger. Medical experts put the odds at 13 million to one.

Bofill admits he felt sheepish when he heard the news of an extra baby, something he’s never seen in his 27-year career. “I was very embarrassed, obviously,” he said. “The news was sent to me by one of my fellows. I thought she was kidding.”

Fugate’s husband, Craig, didn’t find out about the fourth baby until he visited his wife in the recovery room. She told him to count the identification bracelets on her arm, one for each of the four children. They named the four girls Kenleigh, Kristen, Kaleigh and Kelsey. All four babies are healthy and staying in the neonatal intensive care unit, the hospital said.

Fugate said she considers the births “a blessing,” but that these are the last children she’s having. And she means it this time. “This. Is. It,” she told the Clarion-Ledger. 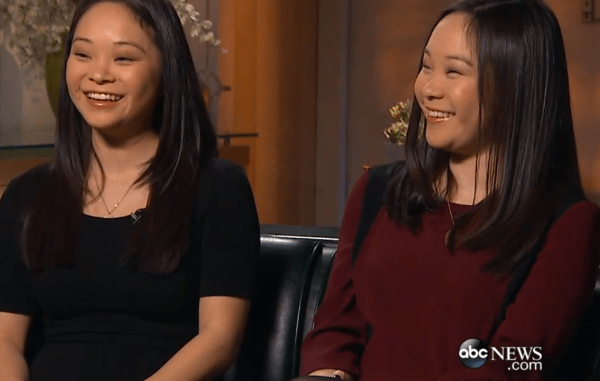 Twin Sisters Separated at Birth Reunited Thanks to Social Media
Next Up: Editor's Pick