A preliminary MH370 report released Thursday calls for real-time position tracking of all commercial flights in the wake of the disappearance of Malaysia Airlines Flight 370, which has left 239 passengers and crew missing since early March.

The Malaysian Transportation Ministry’s report also contains audio recordings of conversations between the cockpit and air traffic control as well as information on the Malaysian military’s tracking of the plane. However, it adds few details previously unknown about the plane’s fate.

The report, which was first sent to the United Nations’ aviation agency earlier this week, comes just as Malaysia Airlines advised relatives of people on Flight 370 to leave Kuala Lumpur and wait for updates on the search from “within the comfort of their own homes.” The families had been staying in hotels paid for by the airline.

“We have to face the hard reality that there is still no trace of the aircraft, and the fate of the missing passengers and crew remains unknown till this day,“ the airline said in a Thursday statement that signals the search could continue for weeks, months or even years.

The airline also said that it will begin making advanced compensation payments to the next of kin of those aboard the flight.

Malaysia Airlines Flight 370 vanished on March 8 with 239 on board while traveling from Kuala Lumpur to Beijing. A massive international search for the plane has failed to find any wreckage. The aerial search for debris was called off Monday, though investigators are continuing the search using unmanned submarines. 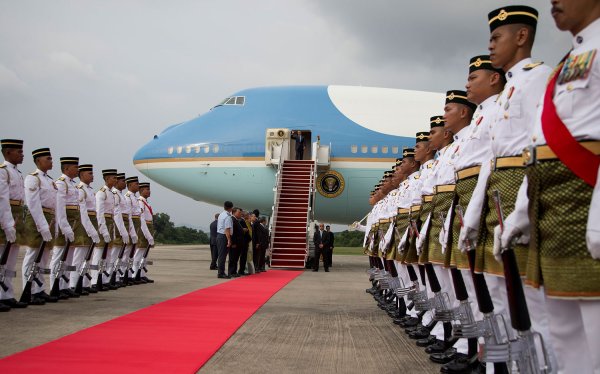 Obama Talks Missing Jet, Trade and Security in Malaysia
Next Up: Editor's Pick