When will politicians learn to beware of the selfie? Like others before him, Narendra Modi’s dalliance with the social-media favorite seemingly backfired on Wednesday, polling day in his home state of Gujarat. After the main opposition Bharatiya Janata Party (BJP) prime-ministerial candidate emerged from casting his vote in Ahmedabad, photographers clicked as Modi took a selfie with his inked finger and the BJP symbol, the lotus. But displaying a party symbol in an active polling area is an election no-no — as was, apparently, Modi’s address to reporters that followed. India’s Election Commission quickly requested that Gujarat open an investigation into its chief minister for violating election code of conduct for attempting to influence voters on voting day.

Still, Modi supporters in Ahmedabad were confident that they would soon see their candidate in the Prime Minister’s seat. In the national elections under way in India, voters across Gujarat went to the polls on April 30 to vote in the state’s next group of 26 lawmakers in Lok Sabha, India’s lower house of Parliament. Modi is standing for one of the seats in the city of Vadodara, in addition to a seat in the holy city of Varanasi, where voting takes place in the coming weeks. “Modi is the king of Gujarat,” says Sachin Patel, a 26-year-old BJP volunteer at the Nishan School polling station. “After this election, I hope he’ll be the king of India. We need him.”

Not everyone in Ahmedabad, Gujarat’s biggest city, is so sure. Before elections, several opinion polls showed growing support for Modi and the BJP across the country, with many voters disenchanted with the past decade of a Congress-led government that has presided over multiple scandals and a weakened economy. Modi promises to change all that, bringing his model of Gujarat governance to the national stage, from streamlining bureaucracy to pulling in investment to improving the performance of welfare programs for the poor.

But despite the strong anti-incumbency mood, Modi remains a divisive figure for many. He was chief minister of Gujarat when bloody religious riots broke out in the state in 2002, in which more than 1,000 people, the majority of whom were Muslims, were killed. Many in Ahmedabad’s Muslim neighborhoods continue to hold Modi’s administration accountable for what happened to their community, though he has always strongly denied any involvement, and Indian courts have cleared him of any wrongdoing.

The BJP has downplayed that history — and their candidate’s Hindu-nationalist roots — in its campaign. But the question of secularism remains a hot-button election issue, with recent anti-Muslim comments by some of Modi’s associates again stirring up concerns across the country. In Ahmedabad, some say those concerns are valid, and believe the BJP-led government has perpetuated an anti-Muslim climate since the riots. “They create a sense of insecurity in the [Hindu] majority,” says Waqar Qazi, who lives in Juhapura, a Muslim area of the city. The Aam Aadmi Party (AAP), a new political party whose leader, Arvind Kejriwal, is running against Modi in Varanasi, has also been campaigning as an alternative in Gujarat in the run-up to the polls. But for most Muslim voters, Qazi says, the choice is about what party has the best chance of preventing the BJP from coming to power in New Delhi. “Congress has failed to be a strong opposition,” Qazi says. “But it’s still the best choice.”

The Modi government says Muslims in Gujarat have prospered along with the rest of the state. The chief minister’s supporters agree. “Even Muslim people say they are safer in Gujarat today than they would be in other parts of India,” says Amar Dave, a retiree who voted at the same polling station as Modi. In Saheb Nagar, a small colony built for Muslim families whose homes were destroyed in the riots, residents say they do enjoy a bubble of security within the confines of their community. But they also feel left out of the new prosperity that other Gujaratis around them seem to be enjoying.

Here, Modi’s high-octane road show, selfies and all, feels like it’s happening in a different city, and not just a few kilometers away. For the residents of the Saheb Nagar colony, the vote is less about who can defeat the BJP and more about who can fix the local drainage system and get rid of the large, deep pool of raw sewage water at the entrance to their community. “Congress hasn’t done anything for us for the last 12 years either,” says Nasim Banu, a 40-year-old mother of four whose family was displaced in the 2002 riots. She throws an arm toward the fetid pool of water. For years she has voted for Congress in principle, as an alternative to the BJP. But today she cast her vote for AAP, the only group she thinks has a chance of bringing real change. “We trusted Congress and they disappointed us. Now we’ll try trusting AAP.” 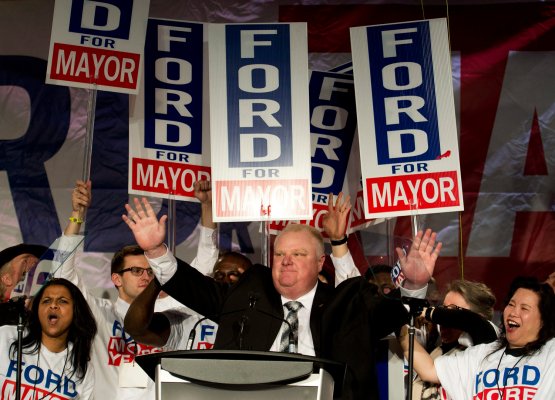 Rob Ford: 'I Have a Problem'
Next Up: Editor's Pick