Eleven days into the Sochi Olympics, Russia finally broke into the upper echelons of the medals table on Monday with a surprise gold in the two-man bobsleigh event. The relief was palpable. For a week and a half, the host country was not even in the top five, and officials were getting worried that the ghosts of Vancouver, where Russia had its worst Winter Olympic showing ever in 2010, might still be dragging the athletes down. Now those fears have passed. With a total of 18 medals, five of them gold, Russia is now in second place in the overall tally, behind Germany but catching up fast. It already has two more gold medals than it took home at the end of the Games in 2010.

On Sunday night at Sochi’s seaport building, where the athletes go to unwind after competitions, the sense of redemption after Vancouver was already potent enough to make the Olympians start popping corks in celebration. Around midnight, six of the medalists got together for an old tradition: they dipped two of their medals into a jug of bubbly and then passed it around, taking big gulps from the communal chalice as if it were some ancient Grecian kylix. Asked afterward how it had tasted, Ksenia Stolbova, who won a silver medal last week in the pairs free-skating event, closed her eyes and said, “Divine,” drawing out the word as if to savor it.

(MORE: It’s Time to Get Over the ‘Miracle On Ice’)

That was a far cry from the mood at the seaport building on Feb. 6, the night before the opening ceremony, when the organizers staged a private party to kick off the Olympics. The celebrity guests at that event made a point to prepare reporters for the worst. “If we don’t perform well, please just don’t blame the athletes or the organizers,” said Iosif Kobzon, a famous Russian crooner. “There’s a lot of pressure on everyone. And we never promised to be the best.”

But on Sunday, the mood was good enough to bring back memories from the Olympic triumphs of the Soviet Union, which was a powerhouse in winter sports. Irina Rodnina, who won gold medals in figure skating for the Soviet team in three consecutive Winter Olympics — 1972, 1976 and 1980 — recalled that the champagne ritual was performed with a bit less flare in those days. It still went by the same name — obmyvanie, which means bathing or, more fancifully, ablution — but the term was used in a figurative sense in the frugal years under communism. “Back then, we didn’t have enough spare champagne to fill a whole bucket,” she told TIME. “So we drank from flutes, and you can’t fit a medal inside a flute.”

That ceased to be an issue in 2001, when the Russian apparel company Bosco Sport began dressing all of Russia’s Olympians. In Sochi, the firm set up this year’s Russian House in the luxuriously remodeled seaport building, which now boasts a nightclub decked out in red velvet with a view of the harbor full of yachts. More than a decade ago, at the 2002 Winter Games in Salt Lake City, the company’s managers were the ones who decided to take the ritual ablution of medals a lot more literally. “If you’re going to bathe, you have to bathe for real,” says the company’s president, Timur Guguberidze, who presided over the ceremony at the Russian House on Sunday.

So when the medalists were called up to the stage around midnight, a glass vase of champagne was poured out for them to bathe their medals. In a bit of an anticlimax, it turned out to be midshelf Italian prosecco, and only two of the athletes brought their medals for the alcoholic bath. “I didn’t want mine to get ruined,” says figure skater Maxim Trankov, who won gold in the pairs free-skating event on Feb. 12. “People keep asking to see it, to touch it. So I put it back in the box a few days ago and am keeping it hidden.”

The two medalists in the sport of skeleton, one the winner of a gold and the other of a bronze, turned out to be a bit less squeamish. But from the grimace on his face, it was hard to tell if Alexander Tretyakov, who won a gold medal in skeleton on Friday, was laughing or weeping as he dunked his treasure into the tub. “It had to be done,” Tretyakov told TIME afterward with a tired smile. “It’s a tradition.”

And even the athletes who didn’t get their medals sticky with prosecco got to sip from the chalice as it was passed around. Four of them then joined a banquet in the adjacent room, where a small group of Russian TV celebrities and politicians lined up to take pictures with them and continued drinking. The bad memories of the last Winter Games seemed as far away as Vancouver is from Sochi. But the guests were still careful not to jinx the final result. In the cautious words of Rodnina, who had the honor of lighting the Olympic torch at the opening ceremony 10 days earlier: “We still have a week to go.” And anything could happen.

MORE: Road to Redemption: Team Russia Seeks a Return to Glory After an Atrocious Vancouver Campaign 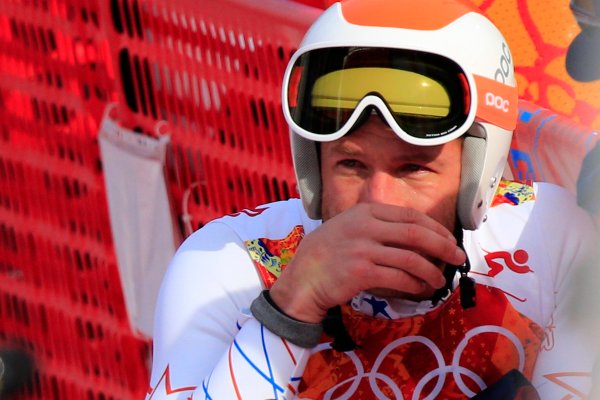 Bode Miller Defends Reporter Who Brought Him to Tears
Next Up: Editor's Pick