It's True: Liberals Like Cats More Than Conservatives Do

By Chris Wilson and Jonathan Haidt

In January, TIME ran a 12-question quiz that guessed your politics based on things like your preference for cats versus dogs and the neatness of your desk. The survey’s questions were all taken from previous research projects that found differences between liberals and conservatives on matters not directly related to politics. (You can still take the original quiz here.)

Many readers were skeptical, to say the least. The comments section simmered with protests like “Since WHEN does being a cat-lover make one a liberal?” and “Having a neat desk isn’t political.”

Loving cats may not make a person a liberal, but it does increase the odds that a person already is one. To see how accurate our survey was, we analyzed the data from 220,192 TIME readers who took the quiz and then volunteered their actual political preferences, and found that all 12 items did in fact predict partisanship correctly. 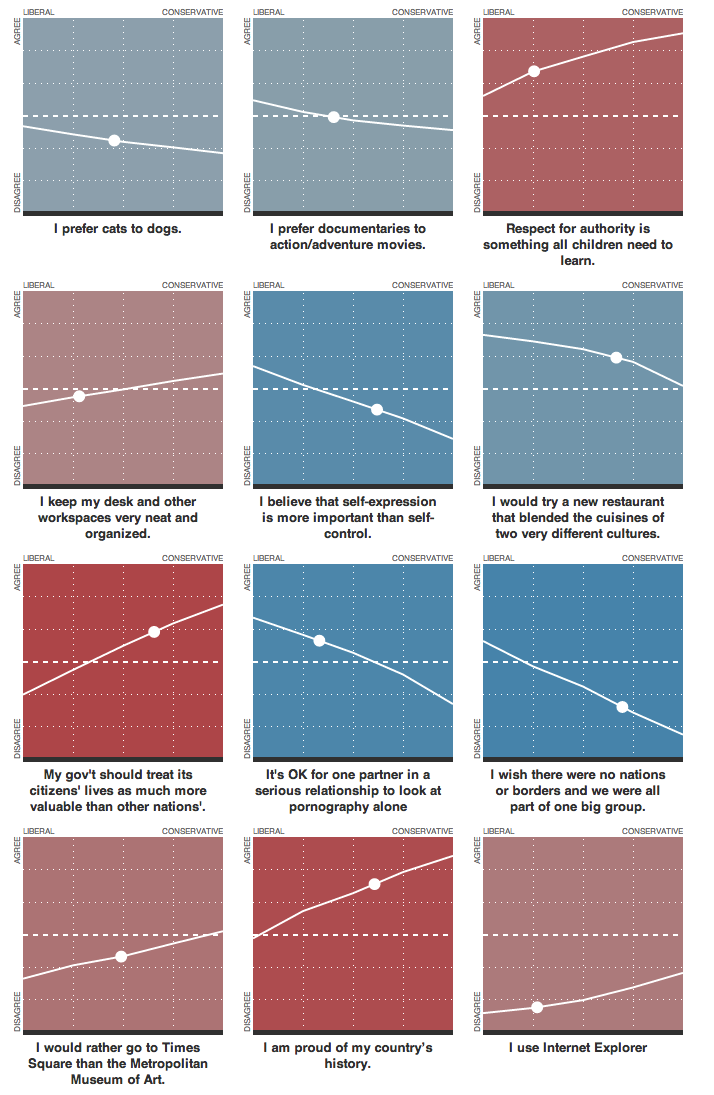 Even seemingly innocuous questions like ones about the state of one’s desk or preference for fusion cuisine had at least modest predictive power. A majority of TIME readers, like a majority of Americans, prefer dogs to cats, but conservatives had a significantly stronger preference, on average.

Overall, the quiz’s predictions were quite accurate when compared to a respondent’s self-reported ideology. (The correlation coefficient was 0.682, for those of you keeping score at home.) The individual questions varied in their predictive accuracy, from low (but non-negligible) correlation of 0.124 for the “cats versus dogs” question to 0.471 for the statement “I’m proud of my country’s history.”

When you add together a bunch of these modest predictors, you end up with a pretty good guess as to how a person votes. Not as good as asking people about their views on taxes, abortion and gun control, but enough to show that partisanship nowadays correlates with many non-political attitudes and behaviors.

Interestingly, Libertarians—often considered as being on the political right—fell between the liberal and conservative extremes on most questions. Even when it came to an affinity for nature’s truest libertarians: felines.

Wendy Davis Is Down But Not Out in Texas
Next Up: Editor's Pick