There's No Such Thing As Healthy Obesity, Says Study

There’s a persistent and controversial question dividing researchers: Can you can be very overweight and also very healthy? The research suggesting people can be healthy at any size was intriguing, and we covered it. But the tide (and the research that supports it) is turning, with many researchers saying it’s simply not possible to be fit and obese.

Today, a new study published in the Journal of the American College of Cardiology that looked at 14,828 metabolically healthy Korean adults with no known heart disease found obese people had a higher prevalence of early plaque buildup in the arteries compared to normal weight people. The researchers defined obesity in the study as a BMI over 25; in the U.S. obesity is defined as a BMI over 35. The researchers conclude that even though these people may not have heart-related disease yet, their weight is still taking its toll on their health.

“Obese individuals who are considered ‘healthy’ because they don’t currently have heart disease risk factors, should not be assumed healthy by their doctors,” said study author Dr. Yoosoo Chang, MD, a professor at Kangbuk Samsung Hospital Total Healthcare Center Center for Cohort Studies in Seoul, Korea in a statement.

In a corresponding editorial, Dr. Rishi Puri, who runs Cleveland Clinic’s Atherosclerosis Imaging Core Lab, highlights the work of both Chang and Kramer, saying their research has shown that obesity is indeed a real disease. He also questions the necessity of determining whether some obese people can be classified as “metabolically healthy.” “Given our current lack of a ‘cure’ or efficient means of successfully treating obesity over the longer term, might the resources spent on trying to define and justify the existence of a ‘metabolically healthy’ obese population be more wisely allocated to elucidating ways to prevent or treat obesity?” he writes.

The idea that there is “metabolically healthy obesity” has been out there for some time, with one of the more recent studies suggesting that some overweight or obese individuals can be as healthy as their normal-weight peers because they had normal blood pressure, no diabetes and pretty stable cholesterol. One study even found that overweight individuals tended to live longer than normal weight people.

Researchers at Mount Sinai Hospital in Toronto, however, reviewed studies dating back to the 1950s, and concluded that people cannot be both overweight and healthy. They found that people who had a high body mass index (BMI) but whose cholesterol or blood pressure were normal for example, were still at a higher risk of dying from heart disease. “This concept of healthy obesity came in the last 10 years,” Dr. Caroline Kramer told TIME when the Sinai research came out. “Some studies report that if you are obese but metabolically healthy, you are protected in a way. We don’t think that that is true. And I don’t think it will come as much of a surprise.”

Part of the discrepancy in the findings could be study design. Some large studies just looked at participants’ weight and whether any adverse events occured, but didn’t look at symptoms for poor metabolic health like blood pressure, or early signs of health problems like plaque build up. Others compared healthy obese people to unhealthy obese people and did not have a proper comparison to normal weight people, Kramer told TIME. Researchers are continuing to try and understand how weight and diseases impact people differently, whether it’s due to genetics or environmental factors.

One thing that all sides agree upon is that when it comes to health, there is significant value in focusing on other factors besides the number on the scale. As TIME reported in March, it’s also possible to be thin and unhealthy, and people can be at risk for the same metabolic problems at any size if they do not take care of themselves. “[These findings] don’t surprise me. I don’t think it changes the fact that our focus should be on health rather than weight,” says Dr. David Katz, founding director of the Yale University Prevention Research Center.”The things we recommend for people to be fit are the very things we are recommending for people to not be fat.”

Katz does agree that we should be paying attention to excess body fat, because depending on the type and where, it can cause disease. He encourages his patients to eat well and exercise and stave off unnecessary and potentially harmful body weight, but recognizes that a little pudge around the edges is likely fine.

“The amount of effort that has to go into losing that last 10 pounds can make life not fun. In that situation, I tell my patients that the whole point of being healthy is to have a good life,” says Katz. “If you are working so hard to lose these ten pounds and it’s going to ruin your quality of life, it’s not worth it.” 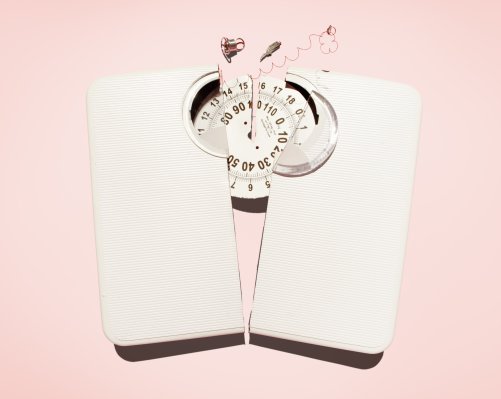 These Are the Fattest Cities in America
Next Up: Editor's Pick