Jamaica's Winston Watts and Marvin Dixon speed down the track during the two-man bobsleigh event at the 2014 Sochi Winter Olympics, at the Sanki Sliding Center in Rosa Khutor February 16, 2014.
Fabrizio Bensch—Reuters
By Sam Frizell

The storied Jamaican bobsled team that inspired the 1993 film Cool Runnings slid into last place Monday after three heats of the two-man bobsled at the Winter Olympics in Sochi.

The two-man team, made up of 30-year-old Marvin Dixon and 46-year-old Olympic veteran Winston Watts, was technically 29th out of 30 teams after three heats, and the only team behind Jamaica was the Serbian squad, which did not start the race. With a time of 1:57.23, they are a full 4.41 second behind the leading Russian pair.

The team first appeared in the 1988 Calgary Games, but hadn’t qualified since the 2002 Games before qualifying for the Sochi games. They’ve attracted a lot of attention this year, partially because of the novelty of hailing from a subtropical climate, as well as the 1993 classic Disney film. And if Jamaica’s performance in Monday’s qualifying bobsled rounds didn’t get the team noticed, maybe dance moves will suffice: 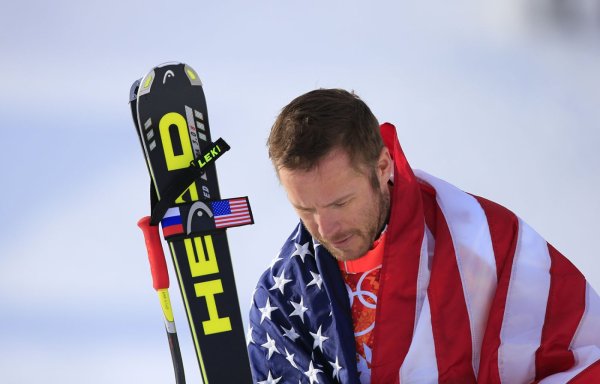 Did Bode Miller Delay Grieving His Brother’s Death?
Next Up: Editor's Pick