Soldiers in China’s People’s Liberation Army (PLA) have grown so big that they no longer fit comfortably in their tanks, according to new research by the military’s General Armament Department. After surveying some 20,000 ground-force soldiers, the PLA found that their average physique had increased by 2 cm in height and 5 cm in waist girth over the past two decades.

(MORE: How China Sees The World)

This expansion makes tanks that were designed 30 years ago too “cramped,” while rifle stocks are too short for today’s arms, compromising accuracy, according to the PLA Daily. (Yes, China’s armed forces has its own widely circulated newspaper.)

Chairman Mao, he of the not insignificant waistline, boasted in the 1950s about the PLA’s sheer strength in numbers. Mao was referring to China’s ability to pour human waves of troops into the Korean War in hopes of overwhelming the enemy. (The tactic cost hundreds of thousands of Chinese lives and ended with the military stalemate in the Koreas that endures today.)

Decades ago, for many a struggling Chinese farmboy, the promise of military rations was enough to make a career in the PLA irresistible. In an era of economic reform and growth, today’s Chinese no longer have to worry about simply filling their bellies. Nutrition has improved to the point where all Chinese — not just soldiers — have grown significantly taller and wider.

Nevertheless, the PLA still commands the largest force in the world, with 1.48 million personnel. Now to cope with their growing physiques, the PLA will begin reconfiguring its armaments and equipment, said the report — just one more reason for the double-digit budget hikes China’s military has enjoyed over the years. 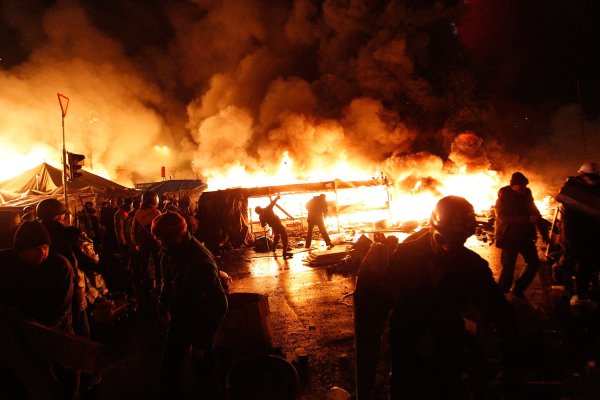 Dozens Dead in Ukraine
Next Up: Editor's Pick