From the booming anti-aging supplement industry to scientists in the lab, everyone wants to know the secrets of a long and healthy — even Google. Just last week, scientists made discoveries related to life-expectancy by studying the blood of a 115-year-old woman, and new research out this week in the prestigious medical journal BMJ reports that light-intensity physical activity every day leads to less disability in old age and a longer, healthier life.

The science behind longevity is continuously emerging. But until researchers figure out how to coax our cells to reverse their steady march toward death, here’s a snapshot of what we know now.

Your personality affects how long you’ll live. In The Longevity Project, one of the largest studies if its kind that spanned eight decades, Stanford researchers Howard S. Friedman and Leslie R. Martin found that conscientiousness beat out all other personality type when it comes to life expectancy. “The qualities of a prudent, persistant, well-organized person, like a scientist-professor — somewhat obsessive and not at all carefree” are the qualities that help lead to a long life. “Many of us assume that more relaxed people live longer, but it’s not necessarily the case.” Why? Conscientious behavior influences other behaviors. Conscientious people tend to make healthier choices, including who they marry, where they work, and the likelihood they’ll smoke, drive too fast, or follow doctors’ orders.

(MORE: The New Science of Happiness)

Your diet matters. A lot. Many studies looking at the lives of centenarians look at what they eat, and considering many people who live into their hundreds reside in the Mediterranean, that diet — which is high in fruits, vegetables, nuts, and healthy fats like olive oil — gets a lot of attention. The diet has been linked to a healthier older age, lower risk for heart disease, and even protection against memory loss. Friedman and Martin also found that lifestyle factors like diet play a role.

Of course, genetics are a factor too. If your parents had long lives, it doesn’t necessarily mean you will too, but there are likely some biological factors at play. Just last week, researchers studying the body of that 115-year-old woman found that stem cell exhaustion may be one of the causes of death for healthy people who live into their hundreds. That means cells get exhausted and literally expire. Similarly, other research suggests that some people may be prone to fewer diseases, or may have varying levels of chemicals in the brain, like serotonin or dopamine, that may be giving them an edge by regulating body functions.

Staying in school will add a few years. Education is correlated with a longer life. A 2012 report from the CDC’s National Center for Health Statistics found that people with a bachelor’s degree or higher live about nine years longer than people who don’t graduate high school. James Smith, a health economist at the RAND Corporation, is also an proponent of the argument for staying in school for better life expectancy. His findings show education may be an even bigger factor than race and income. Educated people are more likely to land better jobs, plan for their future, and make healthier lifestyle choices.

Work stress isn’t bad for you, necessarily. Being a hard worker doesn’t necessarily mean job-stress will harm you. The Longevity Study found that plenty of hard workers lived long lives. “Skeptics may wonder if hard workers really are enjoying life,” the authors write. “We found that productive, hardworking people (even in old age) are not stressed and miserable, but tend to be happier, healthier, and more socially connected than their less productive peers.”

But it helps to be mindful. There are some findings to suggest that being mindful can actually have effects on lifespan. One such study looked at people attending a three-month stay at a meditation retreat and found that after the three months the meditators had on average about 30% more activity of the enzyme telomerase than the controls did, which is related to aging. The findings are very preliminary, but they suggest that the mind does have influence on the body.

You don’t have to be a Pollyanna. While a constantly pleasant disposition seems like it would put people at a lower stress level (and therefore make them healthier) the Longevity Study researchers say that “thinking positive” isn’t necessarily healthy. “If you’re … very optimistic, especially in the face of illness and recovery, if you don’t consider the possibility that you might have setbacks, then those setbacks are harder to deal with,” Dr. Martin told the New York Times.

Being social is critical. Having a strong social group is associated with a longer life. Women tend to have stronger social networks, and that may be part of the reason women tend to live longer than men. We often turn to friends and family for support, and taking care of the people that matter to us may help us take better care of ourselves, some evidence shows. Some research even suggests that immune function is improved when we are around our friends, and that they help with stress regulation.

Sitting a lot is probably the worst thing you can do. Research shows that sitting for long bouts of time put people at risk for shorter lifespans and other health risks. A 2011 study found that each hour people spent sitting down and watching TV after age 25 was linked to a deduction of 22 minutes from their overall life expectancy. 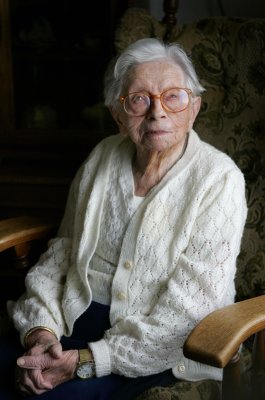 Long-Life Secrets From The 115-Year-Old Woman
Next Up: Editor's Pick