The Smartest Thing Jimmy Fallon Did on His First Tonight Show

I said last week that I wasn’t going to review Jimmy Fallon’s first Tonight Show, and I’m still not, because 1) I’m on vacation, 2) it looks like he’s (rightly) aiming for a scaled-up version of the show he was already doing, and 3) reviewing a late-night show after the first episode is like reviewing a restaurant after checking your coat. But I was struck by one small, but in retrospect very important, thing that Fallon did starting out:

Not as in “Hi, I’m Jimmy Fallon, and I’m looking forward to this!” He very deliberately walked the audience through who he was, who his supporting stars were and what kind of show he was going to do. He literally, at one point, pretty much explained how a late-night show works, down to the fact that a host comes out from behind a curtain and tells topical jokes.

At first blush, it seemed incredibly obvious. It may just have been incredibly brilliant.

Consider the situation a new host like Fallon walks into. He’s starting a show in a time slot where millions of fans just saw a popular show, their show, a show that ran for two decades and put them to bed at night, get canceled. (The Tonight Show didn’t get canceled, sure. But “Jay Leno” did.) He has a job akin to a politician accepting his party’s nomination after a hard primary fight, or the new leader of a small conquered nation, or the CEO of a company that was just acquired. Leno said he was O.K. with leaving Tonight, but that doesn’t mean his fans were O.K. with it. Fallon’s job—well, one of many—was to make them O.K. with him.

So each introduction Fallon made was a chance to frame the story, from the beginning, in a way that could make these longtime Tonight viewers—many of them older—comfortable with him, even while he hopefully brought in new ones. Leno was the host for Middle America, the jovial guy who liked cars—just like America likes cars!—the guy who made fun of politicians from all parties. Now a new, young guy was bumping him out and moving the show to New York City.

Fallon was not going to pretend to be Leno, but he could introduce himself as a nice, approachable kid. He spotlighted his adorable parents and said he hoped they were proud of him. Fallon, born in Brooklyn, emphasized how he grew up in Saugerties, N.Y. (pop. 19,482), and cracked an offhand joke about how small the town is. (He’s not Mr. Big City!) He said his monologue was going to make fun of everyone. (If you don’t like Letterman because you think he’s an East Coast liberal, you’re O.K. here!) He pointed out Steve Higgins, his announcer, not as a longtime comedy writer who contributes fiendish one-liners but as a family man—born in Iowa!—with great kids. (He could be your neighbor!) He hailed the Roots as the legendary band they are but also noted that they could back up anyone from Tony Bennett to Jay Z. (If you don’t like hip-hop, don’t freak out!)

And by the way, I don’t mean any of this to say that Fallon was being calculated or phony—far from it. It was all true. Fallon really does want to show people a good time; I don’t know him personally, but to all appearances he’s a good-hearted guy who takes genuine, contagious joy in his work. He was hardly the first guy to make that Tony Bennett observation about the versatile Roots either. And—most important—he came across humble and considerate, acknowledging that he represented a big change and asking the audience for their attention rather than demanding it.

But it’s possible to be 100% genuine yet do it in a way that’s professionally smart. TV writers like me have tended to focus on Fallon’s earnestness and enthusiasm and likability. But as that introduction made clear, he’s also a savvy professional. In the first 10 minutes of his Tonight Show, Fallon took a show with a very specific point of view and framed it in a way that said it could be for everyone, or at least for a lot of people. Like a candidate shifting from the primary to the general election, he was taking his essential self but positioning his message not just to a niche—a 12:35 a.m. talk show is all about turning out your base—but to the broadest electorate.

It wasn’t a bravura, attention-getting opening, like Conan O’Brien’s Tonight in 2009, which cold-opened with a filmed piece of Conan running across the continent to L.A. It was simply Fallon respectfully asking his new audience to get to know him. It led into a set piece that involved a slew of celebrity “old friends” coming onstage to pay off a $100 bet that he’d never host The Tonight Show—a funny, attention-getting bit but one whose subtext was: This is a guy who’s good at making friends.

That’s going to be his job now. Five nights a week. A few new friends at a time. 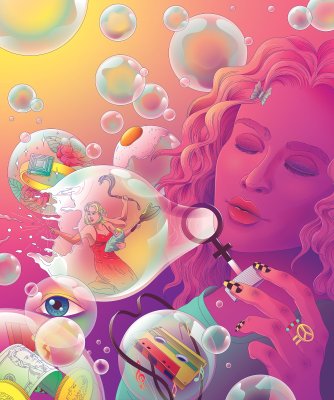 From Britney to Buffy, We're Suddenly Rethinking Postfeminist Pop Culture—and Nothing Could Be Healthier
Next Up: Editor's Pick