9 Most Shocking Moments from House of Cards Season 2

SPOILER ALERT: DO NOT CONTINUE IF YOU HAVE NOT WATCHED ALL OF HOUSE OF CARDS SEASON TWO.

House of Cards set the bar high in terms of shock-factor with Russo’s murder last season. Some viewers might have questioned whether they could top that drama in the second season — but the end of episode one assured us that Cards hadn’t lost its punch.

Here are the nine most shocking moments from season two, ranked.

What the whaaaatttt? If anyone doubted that any of the characters on House of Cards are disposable (except, perhaps for the Underwoods themselves), the writers proved them wrong. Series co-lead Kate Mara was given the heave-ho (literally) in just the first episode. The moment was not only shocking because of the gruesome way Zoe died but by the seemingly reckless way the always-calculating Frank Underwood killed her: Someone could have seen him throw her in front of the car! But with that big twist out of the way, there wasn’t much left this season that could make us gasp.

Who is this man? Is he being tortured? Oh, nope — this is a sex thing.

What was so surprising and bizarre about the first shot of Feng with his head in a bag is that we never saw anything like it again. Sure, we get the sense that Feng is a bored and slightly scary billionaire. But despite all his wealth, he only ends up being a pawn in Tusk’s game — and his strange sexual fantasies never come back into play.

Claire does something rare this season — she cries. Specifically, she cries when she is forced to face her rapist. At first, Claire’s history with General Dalton McGinnis seemed to be a ploy to garner sympathy for her — much like some accused Scandal of doing with Mellie’s rape earlier this season. But soon Claire’s rape, like everything else in the show, becomes a means of leverage for the Underwoods. After all, her trauma leads to a bill — a bill which is later leveraged as a bargaining tool for political support when Underwood takes aim at the Oval Office.

I doubt that the reveal about the rape was calculated, unless Underwood hired or blackmailed that man into sending fake anthrax to the White House so he couldn’t make the interview (and had the same man later to plant the bomb in front of their doorstep). That said, considering the brick incident last season, it’s impossible to put anything past the Underwoods. Ah — there’s still so much to be unraveled in season three.

I actually cheered for Claire this episode. Yes, she’s still a morally bankrupt, manipulative woman who intentionally ruined the lives of her ex-lover, the First Lady and a fellow rape victim this season. And yes, I know she was lying about the number of abortions she actually had and maybe the circumstances under which she had them. But nonetheless — her “I will not be ashamed” speech was brave and inspiring, however calculated it might have been.

5. Rachel kills Doug with a rock

Who knew that Rachel had that in her? I guess Doug forcing her to break up with Lisa was the last straw. Frank mentioned at the end of the episode that they had put an APB out on Doug’s car, so the big question is — where did Rachel go? Did she pick up Lisa and try to make a run for it? Did she dump the car? Did she wander back into that Twin Peaks-esque forest? I’m hoping she teams up with someone else who wants revenge against the Underwoods — maybe Freddy or Janine. Which brings me to…

6. Freddy thrown under the bus

No. No. No. I refuse to believe it. Freddy was easily the best character on this show, and the only person who made Frank Underwood seem human. Frank had a hard time cutting Freddy out (a harder time, I would point out, than Claire had manipulating Adam, a man she supposedly loved once upon a time). But in the end, Frank still did it — he sacrificed his only real friend for his White House dreams.

The move was shocking because Freddy’s criminal past popped up out of nowhere — wouldn’t Frank or the first reporter have looked into that? — and because part of me still wanted to believe the man who throws people in front of subway cars still had a heart, albeit a cold one. Good for Freddy for refusing the Underwoods’ money. Let’s hope this isn’t the last we see of him.

(Side note: Meechum was off duty so wouldn’t someone else have had to come on duty and check in with the Underwoods? Wouldn’t they have heard or seen something?)

8. The near-death of Cashew

Cashew may be just a guinea pig, but he doesn’t deserve to be crushed underfoot. In fact, Cashew may be the only totally innocent character on the show. Those squealing noises were almost too much to bear. (Also one of the McPoyles would be overly attached to a guinea pig.)

9. Jackie gets a tattoo

Who is this mysterious girl in a hoodie walking into a tattoo parlor? Must be Rachel, right? No! It’s the majority whip! Okay, so maybe this wasn’t that big of a twist, but the shot was a nice homage to some of House of Cards director-producer David Fincher’s previous work, i.e. Girl with the Dragon Tattoo. (Part of me expected Rooney Mara, Kate Mara’s sister, to be the girl in the hoodie. Zoe’s sister — played by Kate Mara’s sister — showing up to investigate her death — now that would be a twist.)

The tattoo scene did tell us that maybe Jackie is a little more human than Frank. As she tells Remy later, she needs the pain of the needle to cope with her having killed so many people.

Yes, I left Underwood becoming president off the list. But we all saw that coming from a mile away. All hail President Underwood. 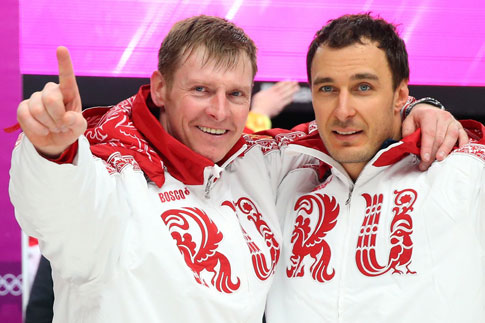 Russia Leaps Up Sochi Medals Table to Vanquish the Ghosts of Vancouver
Next Up: Editor's Pick