By Dan Hirschhorn and Sean Gregory

Donald Sterling, the Los Angeles Clippers owner who has been at the center of a national firestorm since a recording emerged last week depicting him making racist comments, was punished Tuesday with a lifetime ban from the NBA and a $2.5 million fine.

In his first major decision since assuming leadership of the league, NBA Commissioner Adam Silver handed down the unprecedented punishment of banning an owner from his own team. Silver said Sterling will be prohibited from attending games, practices, league owner meetings, or participating in team or league business in any way. Silver said he would ask the other owners to exercise their authority to force a sale of the team—a move that could set up a heated legal battle.

“I am banning Mr. Sterling for life,” Silver said at a news conference in New York. He said the lifetime ban was effective immediately and would remain so regardless of whether Sterling sells the team.

Sterling did not immediately comment Tuesday. The recording, which was first published by TMZ over the weekend, depicted him chastising his then-girlfriend for posting a photo of herself alongside a friend and NBA legend Magic Johnson to Instagram. During the conversation, Sterling told his girlfriend not to bring black people to Clippers games.

“It bothers me a lot that you want to broadcast that you’re associating with black people. Do you have to?” Sterling said in the recording. “You can sleep with [them]. You can bring them in, you can do whatever you want. The little I ask you is not to promote it on that … and not to bring them to my games.”

“The views expressed by Mr. Sterling are deeply offensive and harmful,” Silver added. “That they came from an NBA owner only heightens the damage and my personal outrage. Sentiments of this kind are contrary to the principles of inclusion and respect that form the basis our diverse, multicultural and multiethnic league.”

The ban comes in the midst of a playoff run by the team. The Clippers are tied at two games apiece in a first-round, best-of-seven series against the Golden State Warriors, with game 5 set for Tuesday night in Los Angeles. The distracted Clippers were crushed in game 4, 118-97, after turning their warmup jerseys inside-out before the game as a show of protest.

The Clippers didn’t immediately comment Tuesday, but the team changed its homepage to simply declare: “We Are One.” The team also wrote “#WeAreOne #Clippers” on its Twitter feed.

Silver said he’s hopeful both the team and the league can move past the controversy.

“My message to the Clippers fans is this league is bigger than any one owner,” he said.

Twenty-two of the league’s 30 owners would have to vote in favor of forcing a sale. Silver said he hadn’t polled the owners, but that “I spoke to several owners and I have their full support.” It remains unclear who will assume control of day-to-day operations of the team. Sterling purchased the Clippers for $12 million in 1981, and NBA franchise values are soaring: The small-market Milwaukee Bucks just sold for $550 million. A sale could also compel corporate sponsors that have abandoned the franchise, such as State Farm, Kia Motors, Red Bull, and Virgin America, to return.

Sterling has kept a low profile since the recording emerged. His representatives have neither confirmed nor denied its authenticity. “Mr. Sterling is emphatic that what is reflected on that recording is not consistent with, nor does it reflect his views, beliefs or feelings,” the team said in a statement over the weekend. “It is the antithesis of who he is, what he believes and how he has lived his life. He feels terrible that such sentiments are being attributed to him and apologizes to anyone who might have been hurt by them.”

The $2.5 million fine against Sterling is a drop in the bucket for a man whose total net worth is estimated to be $1.9 billion, and he will presumably make millions if he sells the team.

Silver was under intense pressure to take action. Star players around the league and other owners, including Michael Jordan of the Charlotte Bobcats and Paul Allen of the Portland Trail Blazers, had blasted Sterling, and President Barack Obama even weighed in while traveling in Asia over the weekend. “I have confidence that the NBA commissioner, Adam Silver, a good man, will address this,” Obama said from Malaysia. 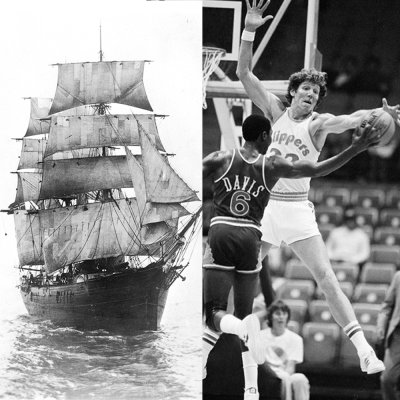 The Clippers Are Actually Named After a Ship
Next Up: Editor's Pick