Here's What Amy Schumer Thinks About Everything

Inside Amy Schumer is the funniest sketch show on Comedy Central, and maybe even all of television. On the eve of what Schumer promises is the best episode of her second season, she spoke to TIME about pushing the boundaries of cable TV, plastic surgery, and what happens when female comedians date.

Amy on what her parents did to make such funny kids:

[Schumer’s sister Kim Caramele is also a comedy writer, and a producer on Schumer’s next movie. Her brother is also funny.]

“It’s a combination of a naturally good sense of humor and also a good amount of pain at a young age. We had a really dark couple of years in our house and we would just laugh about it. My dad got M.S., then we went bankrupt, and then my parents split up and we moved a lot. I have such a dark sense of humor and the most awful stuff makes me laugh, and I think it’s probably because of that.”

“I do want women to feel comfortable with themselves as sexual beings, and I don’t think anyone should have to apologize for that or act like ‘oh no, I’m a girl, I only want to have sex if its to make a baby.’ But I’m just being myself. This is the stuff I think is so funny and I want to talk about.”

On how her sex jokes affect her love life:

I’m luckily someone who doesn’t have any diseases. But that’s just the price that I decided to pay. I’m not someone who wants to live in a way that would make me the most appealing, and operates only for that reason. So I’m just gonna be honest. And I’m really only interested in someone who would appreciate that, instead of being scared.”

On the guys she jokes about:

“Any guy I’ve ever joked about, I’ve always asked if it was okay with them. I don’t ever say anyone’s name, but I always ask ‘is it cool with you if I talk about this?’ and sometimes they say no and I say ‘okay,’ and I don’t. I’ve always gotten their permission.”

“I’m 32, and I’ve made a promise to myself to not get plastic surgery. And I don’t think that it’s wrong, I don’t think it’s stupid, I’m just really scared of the needle and stuff. And I just think things can go so wrong.

I know a lot of female comedians who have had plastic surgery. Most of the ones that are the most successful have. It’s nobody you’d be shocked by. It’s hard to be a girl, you’re judged so much on your appearance, you’re onstage being looked at, you’re on camera, it’s hard. I’m just like, ‘this is what I look like.’ Sometimes I’ll say that in the mirror, ‘This is what you look like. Youre beautiful, this is it. You’re a good person.’

I’m lucky because I grew up pretty delusional about how attractive I was. I was blessed with parents who filled my head with lies.”

On her next big project:

“It’s a movie called Train Wreck and it’s about me. It’s about a girl who’s getting into her 30s and her behavior just isn’t cute anymore. Her defense mechanisms are catching up to her. Bill Hader plays my love interest, and Judd Apatow is directing. My sister is helping on it also.

It’s very funny and very real, and people will be able to relate to it, even if they don’t want to admit it.”

On what to call certain body parts on TV:

“We fought to not have the word ‘pussy’ bleeped out this season. We’re talking about it just as a body part, not as a sexual term. So I’m very proud of that.

“It was important to me and to Jessi Klein (the head writer and executive producer) and to Dan Powell (the other EP) because it’s just such a part of our show. And you can say ‘dick’ and they don’t bleep that. The word ‘pussy’ has just become a word for the vagina. So we were like: ‘I don’t think we should have to bleep that.’ We weren’t gonna have a filibuster about it, but we wanted to discuss it. We told Comedy Central ‘we think this,’ and they were like ‘no’ and we were like, ‘no, we want to talk about it.’ So we had a phone call with them, and they were like ‘yeah, we thought about it, you’re right, and we’re not gonna bleep it.’ They were very cool about it.”

Stay tuned for more from Amy Schumer on why tonight’s episode is her favorite. Plus she has stuff to say about meerkats. 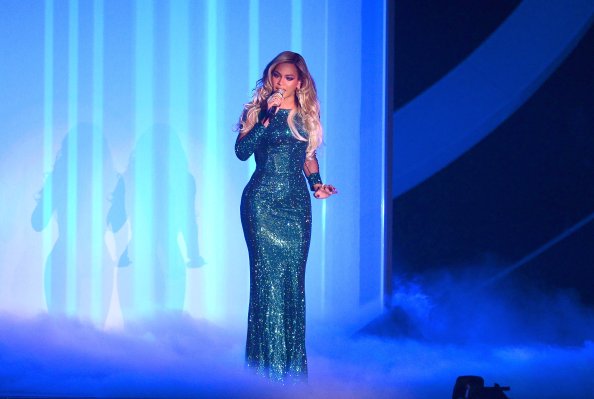