A Rocket Man's Empire of Influence

It’s a testament to the sheer scale of Elon Musk Inc. that five days after launching one of his flagship products, the Falcon 9 rocket, into space on Sept. 29, Musk was explaining why another–the Model S electric car–had burst into flames on the ground. Then again, the intrepid CEO of SpaceX, a commercial space-exploration firm, and Tesla, an electric-car maker (he also advises other companies), is no stranger to risky business.

Musk, 42 and a member of the 2013 Time 100, first rose to fame after acquiring an early version of PayPal in 2000–way before consumers readily bought stuff online. Since selling the company to eBay in 2002, he’s fashioned himself into an inventor-at-large with the audacity (and money) to change the way we travel, power homes and more. As prominent venture capitalist Andrew Chung puts it, Musk is “really about inventing what he sees as the greatest future.”

Sometimes there are stumbles: after a video of that Model S fire went viral, Tesla’s market value dropped more than $2 billion. (No one was injured during the incident, however, and Musk responded with a lengthy explanation on the company blog.) But they’re often paired with success: the recently tested SpaceX rocket, for example, will help Musk make good on a $1.6 billion contract with NASA.

Here, a look at his empire of influence.

HOW ELON MUSK IS CHANGING THE WAY WE …

The Tesla Model S is the highest-rated car ever tested by Consumer Reports. And it ought to be: the $70,000 all-electric vehicle has energized the wan electric-car movement. Now major automakers are trying to adopt the model’s innovations, and Tesla has a larger car–the Model X–due in 2014.

A startup is already trying to raise funds to begin construction of Musk’s Hyperloop, a $6 billion alternative to high-speed rail in California. The system would send passengers through a reduced-pressure tube at 760 m.p.h. (1,220 km/h). That’s L.A. to San Francisco in roughly 30 minutes.

Musk is chairman of SolarCity, the leading provider of residential solar power in the U.S. The firm has a $1 billion project under way to add panels to U.S. military housing communities and has a goal of reaching 1 million customers by 2018.

SpaceX, a private company that Musk founded in 2002, has roughly $5 billion in contracts to complete an array of missions, including launching satellites for businesses and resupplying the International Space Station. Soon to come: reusable rockets. 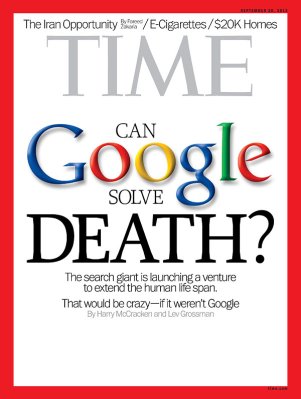 Google vs. Death
Next Up: Editor's Pick