4 Ways Android Wear Can Succeed Where Google Glass Has Failed

Last week was a rough one for Google Glass, as pundits took turns laying into Google’s prototype wearable tech.

Longtime Glass advocate Robert Scoble said he stopped wearing his high-tech glasses at Coachella because of the negative reaction it triggered among his fellow concertgoers. Scathing editorials in the Weekly Standard, Forbes and ZDNet followed, with ZDNet’s Adrian Kingsley-Hughes declaring that “Google Glass is dead.” Joining the pile-on, a Colorado-based bank had some fun lampooning a Glass-dominated future.

It’s tempting, as Kingsley-Hughes has done, to wonder if Glass’s troubles will derail wearables entirely. But I wouldn’t pin the success or failure of the entire category on a single pair of glasses. If anything, Google is on the way to correcting Glass’ shortcomings with Android Wear, a platform for wearable technology that’s more focused on smartwatches.

I don’t know if Android Wear will be a hit, but the software seems clever. And as a whole, it has a better chance at mainstream acceptance than Glass ever will, for several reasons:

No Camera Creepiness: With Glass, you can start recording a video with the wink of an eye, and because the camera is mounted to your head, no one knows for sure if you’re recording them or not. Wearing Glass changes the social dynamic, causing people around you to keep their guard up. Or, it can get you kicked out of movie theaters, attacked at bars and avoided at concerts.

Although some Android Wear devices may include cameras, it won’t be the same as having a hands-free camera at eye level. Any act of recording would be more conspicuous, similar to capturing video from your phone. You can try to do it in secret, but it won’t be as easy, especially in one-on-one situations.

The Use Cases Are Clearer, and They Advertise Themselves: Imagine using a smartwatch to show your boarding pass at the airport, or to swipe your loyalty card at the grocery store. Instead of taking out your phone and looking around for the right app, the appropriate barcode would just pop up based on your location. This could be a killer application for wearable technology, and while it’s on the feature list for Android Wear, it’s just not possible with Google Glass.

These wrist-based transactions would have a built-in marketing benefit for Google: Anyone who sees the transaction, whether it’s a friend, the cashier or the person in line behind you, is likely to be impressed. They may ask about how you bought a coffee without removing anything from your pockets, and may begin to consider a smartwatch when they hear about the other benefits.

Glass will always be a novelty, by comparison. People can see you wearing it, but don’t know why (though, again, they may suspect you’re recording them). You can let people try it, but that becomes a hassle, and doesn’t give much of a chance for people to see what Glass can do.

You Could (Hopefully) Turn It Off: This is just speculation, but let’s assume that Android Wear gets a “Do Not Disturb” feature, which would disable notifications, go into a basic clock mode and silence your phone. This, in itself, could be another killer feature. To the people you’re with, it would communicate that your attention is undivided, that you’re not going to be distracted by the device on your wrist or in your pocket.

Glass is different. You can turn it off, but the people you’re with may not realize it unless they understand how the device works–and they may still be distracted by its presence. You can take it off, but then you have to deal with putting it in a safe place where it won’t be forgotten or broken. A smartwatch can stay on your wrist the entire time.

The Barrier to Fashion Acceptance Is Lower: Traditional glasses don’t require any mechanical parts–they’re just lenses and frames–so without a quantum leap in miniaturization, devices like Glass will never be an invisible addition to standard eyewear. Traditional watches, however, are packed with moving parts and a battery, so there’s already a place for smartwatch components to go. While we haven’t seen any Android Wear watches up close, existing smartwatches such as Pebble Steel are about the same size as a regular watch. It’s a lot easier to wear one without making a spectacle of yourself.

While Google hasn’t announced a price or release date for the consumer version of Glass, the first Android Wear watches from Motorola and LG will launch this summer. 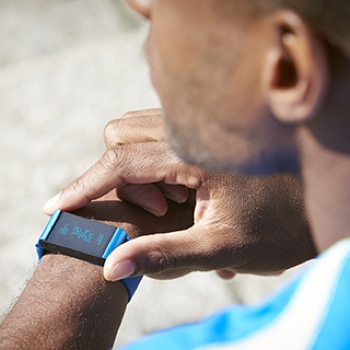