U.S. Sanctions Push Putin Toward His Dream of A New Financial System

A little over a year ago, in early March 2013, the Russian state energy czar Igor Sechin made his American debut at an oil summit in Houston, Texas, reportedly accompanied by armed guards equipped with a K-9 unit. The speech he gave that day at the СERAWeek conference, an annual gathering of energy titans from around the world, was part of a pit stop for Sechin. He was on his way to a more high profile event, the funeral of his old friend Hugo Chavez, the truculently anti-American President of oil-rich Venezuela. But since he was passing through the Western hemisphere anyway, Sechin clearly felt it was worthwhile to court some American investors. “I call for us to work together,” he told the audience that day, according to Russia’s Vedomosti daily, “to drive our business for mutual benefit.”

At the time, no one could have predicted that this would be Sechin’s last American visit as a welcome ambassador for big Russian oil. On Monday, the U.S. released a blacklist of seven Russian officials sanctioned in retaliation for Russia’s incursions in Ukraine. By far the most influential figure on that list is Sechin, who is not only the head of the world’s biggest oil producer, Rosneft, but an old friend and confidante to Russian President Vladimir Putin.

And his response? That’s been clear since the middle of March, when Sechin first learned that he was in the U.S. Treasury Department’s crosshairs. “He who messes with us also helps us. So thank you very much,” he said. “From a business standpoint, Russian companies have plenty of places to move their activities. There is a global economy, a big world, where Europe and America haven’t been the bosses for a while now.”

Part of that answer was clearly bravado. As TIME reported last month, when the U.S. hit Russia with its first round of sanctions, the impact on the targets of the sanctions was quick, choking off access to global markets and payment systems, which are still dominated by the U.S. But Sechin also has a point. There is no way to isolate the world’s largest publicly traded oil producer from the global economy without causing the world economy to crash, and if the U.S. refuses to do business with Sechin, there are plenty of others standing in line. The global oil major BP, for instance, is already the second biggest stakeholder in Rosneft after the Russian government, and has been more than willing to offer Russia its state of the art technology.

But all of these concerns take a backseat to Putin’s larger strategy – and Sechin’s. For years, they have been calling for a new world order – or as they tend to call it, a “multipolar world” – in which the West must cede its dominance of the global economy to several regional powers, including Russia. That dream has long been little more than wishful thinking because of the difficult reforms it would require. Central banks around the world would likely have to start keeping their reserves in currencies other than the dollar and the euro. Commodities trading would have to diversify away from the hubs in New York and London. Because of the inertia of the global financial infrastructure, these changes have often been dismissed either as pipedreams or very longterm projects.

But the sanctions regime against Russia will likely only accelerate its drive to carry out these reforms. In the past month, Moscow has already begun trying to set up its own “national payment system” to challenge global players like Visa and Mastercard. It also appears to be dumping American treasury bills, one of the favored means of storing its reserves. The next stage in this strategy is expected to come in May, when Sechin is set to take the helm of a commodities exchange in St. Petersburg, his and Putin’s hometown. In the coming years, that exchange, which is known as SPIMEX, will be seeking to take a major chunk of the global trade in oil and gas, with the ruble as its main form of settlement. All of these efforts have been pushed into overdrive amid Russia’s standoff with the West over Ukraine, and to be sure, they have nudged Russia into murky economic waters. In seeking to disrupt the framework of the global economy, Russia could easily drag itself into a depression.

But Putin has been preparing for that. Over the past two years, he has urged all Russian businessmen and officials to bring their money onshore, and apart from building closer ties with China – the main challenger to the West’s economic hegemony – Russia has formed alliances with other states that would love to see that hegemony broken. Venezuela is one example. It sits on top of the largest untapped reserves of oil in the world, but it has struggled to bring that fuel to market because of its lack of partners in the West. (The U.S. has not had an ambassador in Caracas since 2010.)

All the while, Russia has gone out of its way to help. Less than three months after attending Chavez’s funeral, Sechin returned to Venezuela to sign a lucrative joint venture that was wistfully christened Petrovictoria. After the signing ceremony, he presented the Venezuelan President, Nicolas Maduro, with a gift from Putin – a bronze bust of the late Commandante Chavez that is now stored in the Presidential Palace in Caracas. It was a touching show of friendship, and a few months later, Maduro sent his own envoy to Putin with a message, “congratulating him on that important role that he plays in the process to shape the multipolar world without war, a world, which our Commandante Hugo Chavez was dreaming about.”

Any nation hit with U.S. sanctions would likely share in that dream, as it presupposes the end of the American supremacy that gives its economic sanctions force. And the more isolated Russia grows from the West, the more desperate it will become to turn that dream into reality. It already has a lot of allies on its side, not least of all China. So when the dust settles and Russia grows accustomed to the pain of Western sanctions, Putin may wind up a lot closer to the multipolar world he wants. That, at least, seems to be his strategy, and if it means staying away from the oil kings of Houston, then so be it. Beijing and Caracas will have to do. 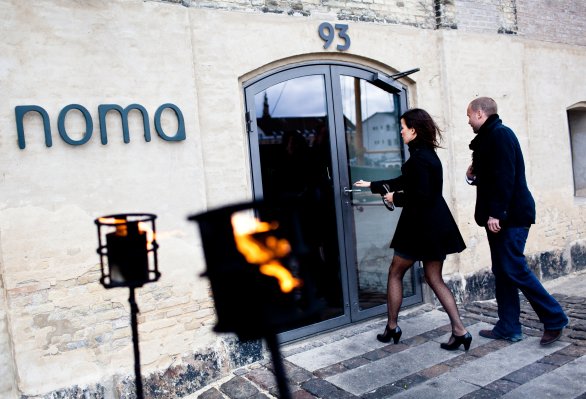 Noma is the World’s Best Restaurant Once Again
Next Up: Editor's Pick