Bill Nye “The Science Guy” told Republican Representative Marsha Blackburn of Tennessee to stop questioning the facts behind climate change on Sunday morning, as the Congresswoman said the “engineer and actor” didn’t know enough about climate science to claim authority.

The two sparred over the the most appropriate response to extreme weather events and global warming on NBC’s Meet the Press, and disagreed on the scientific consensus regarding climate change.

Blackburn maintained that there is no consensus in the scientific community about global warming, pointing to two vocal dissenters, Richard Lindzen of MIT and Judith Curry of Georgia Tech, who claim that humans are not causing climate change.

“Neither [Bill Nye] nor I are a climate scientist. He is an engineer and actor, I am a member of Congress. And what we have to do is look at the information that we get from climate scientists,” said Blackburn. “There is not agreement around the fact of exactly what is causing this.”

Ninety-seven percent of climate scientists agree that climate-warming trends over the past century are very likely due to human activities, according to NASA. Experts say there is still some uncertainty in absolutely linking isolated extreme weather events like Hurricane Sandy or bad droughts to global warming, but the vast majority of scientists ascribe climate change and the increase in extreme weather to human activity.

Nye responded harshly to the Congresswoman.

“We have overwhelming evidence that the climate is changing. That you cannot tie any one event to that is not the same as doubt about the whole thing,” said Nye. “There is no debate in the scientific community. I encourage the Congresswoman to really look at the facts. You are our leader. We need you to change things, not deny what’s happening.”

Nye said the U.S. could stand to gain economically by investing in new technologies, but warned against the cost of denial.

“For me, as a guy who grew up in the U.S., I want the U.S. to lead the world in this,” he said. “These are huge opportunities, and the more we mess around with this denial, the less we’re going to get done.” 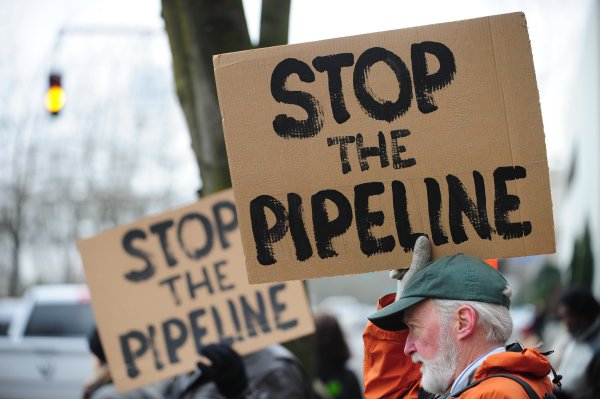 Traveling the Keystone XL Pipeline
Next Up: Editor's Pick