When Kathleen Smith and Lisa Cloninger got engaged last October, they hoped to get married at Holy Covenant United Church of Christ. It was after all, their religious community and the church that had been their home for their 13-year relationship. But there was a problem: Holy Covenant is in Charlotte, North Carolina, a state that does not allow ministers to perform legal same-sex marriages. Ministers who do marry a couple that has not yet obtained a marriage license can face misdemeanor charges punishable by up to 120 days in jail.

On Monday morning, Holy Covenant’s denomination, the United Church of Christ (UCC), along with ministers of other Charlotte area congregations including a rabbi, filed a lawsuit challenging state marriage laws for restricting ministers’ free exercise of religion. The UCC is also seeking preliminary injunction that would allow ministers to choose whether to perform a religious marriage. The case appears to be the first time a national Christian denomination has challenged a state’s marriage laws.

The lawsuit has been in the works since 2012, when North Carolina voters approved Amendment One, a constitutional ban on gay marriage, with 61% of the vote. State laws prevent ministers from performing weddings if the couple does not already have a marriage license, and so religious wedding ceremonies are at odds with the law even if ministers are not sanctioning civil marriages.

Earlier this spring, the UCC, the lead plaintiff, reached out to local congregations, including Holy Covenant, to ask pastors if any church members might be candidates to join the suit. Three other couples from other churches have joined the Smith-Cloningers, and the group is suing the state’s attorney general Roy Cooper as well as other county district attorneys and registers of deeds.

The effort is part of the UCC’s long history of social justice advocacy. The mainline Protestant denomination—President Barack Obama’s own church denomination in Chicago—has more than one million members and 5,100 congregations nationwide, including 150 churches in North Carolina, and the UCC general synod passed a resolution supporting marriage equality in 2005. “For 40 years or more we have been seeking justice and equality for gay and lesbian people,” explains Geoffrey Black, president and general minister of the United Church of Christ. “This is the moment when we have an opportunity to seek justice and equality for gay and lesbian people, and so we are taking that matter very seriously.”

Smith and Cloninger are planning to have their religious ceremony at Holy Covenant in October no matter the outcome of the case. “We’ve bought dresses, we’ve sent save the date cards, we’ve booked a reception hall,” says Smith, who along with Cloninger is a North Carolina native. “Nothing could make us happier than if we were able to have both a religious and legal ceremony with everyone that we love around us and our pastor legally able to officiate that ceremony.”

Nancy Allison, the pastor of Holy Covenant and an individual plaintiff in the case, is willing to face any repercussions that may come. “I can’t imagine the law enforcement of North Carolina coming after a clergy person for doing their job, but if I were to be arrested for this, I would gladly face those arrest charges,” Allison explains. “I can do no other than move forward under my convictions.” 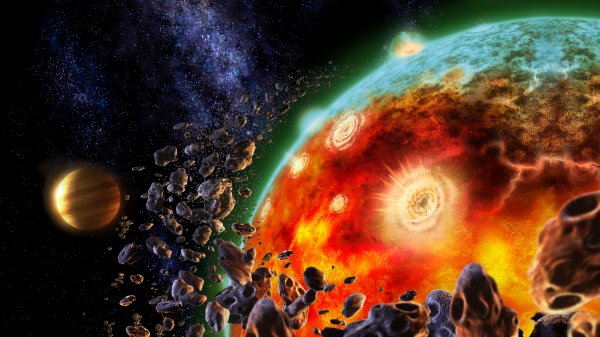 Why Science Does Not Disprove God
Next Up: Editor's Pick