Here's What the NBA Can Do to Donald Sterling

NBA commissioner Adam Silver has scheduled a news conference for Tuesday in New York City, at which point he may announce his punishment for Los Angeles Clippers owner Donald Sterling, who purportedly made racist remarks about African Americans during a private conversation revealed by TMZ. Silver, who replaced longtime NBA chief David Stern in February, promised on Saturday to move “extraordinarily quickly” on the Sterling manner. “There are broad powers in place under the NBA’s constitution and bylaws that include a range of sanctions, and all of those will be considered depending on the findings of our investigation,” Silver said.

Turns out that in his first major decision as NBA commissioner — President Barack Obama even referenced Silver by name during his comments on the matter from Malaysia, so no pressure — Silver will indeed have pretty broad leeway to dole out what, in his view, is just punishment. The first, and probably least effective, option is a straight fine. NBA owners have been subject to fines before: Mark Cuban, for example, got slapped with a $500,000 penalty in 2002 for criticizing referees. Stern fined Sterling $6 million back in 1984, after Sterling moved the Clippers from San Diego to Los Angeles without the league’s approval.

Silver doesn’t need the other owners to approve a fine. But Sterling is worth $1.9 billion, according to Forbes. Even some recording-breaking fine — say, in the range of $10 million or so — will be a pittance for Sterling, who has a documented history of loutish behavior.

Silver can also suspend Sterling, again, without a formal vote from the owners. Player suspensions are fairly straightforward: you can’t practice or play. But can an owner, who has paid millions for the asset, be kept out of his office by a third party, in this case, the commissioner? Yes. In 2000, for example, Stern suspended Minnesota Timberwolves owner Glen Taylor from October 2000 through August 2001 because of a secret deal the team concocted with forward Joe Smith that circumvented the league’s salary-cap rules. During that time, Taylor could not go to games, negotiate deals or talk to reporters (ironically enough, Taylor is now interim chairman of the NBA’s board of governors).

Essentially, the owner still holds on to the asset, but can’t be involved in day-to-day operations. In baseball, then commissioner Fay Vincent banned George Steinbrenner for life in 1990 for paying a gambler to dig up dirt on outfielder Dave Winfield. Vincent later allowed Steinbrenner to return for the 1993 season.

Slapping an indefinite suspension on Sterling would probably be Silver’s best tactic to force Sterling to sell the Clippers. Not that Sterling doesn’t already clear economic incentive to unload the team. He purchased the franchise for $12 million back in 1981. According to Forbes, the Clips are now worth $575 million, but even that figure is probably conservative: the small-market Milwaukee Bucks, sans stars like Blake Griffin and Chris Paul, just sold for $550 million. In the open market, the Clippers would surely fetch much more. As SI.com’s Michael McCann reports:

Sterling could appeal any kind of punishment and drag this mess out even further. The fact that the recording between Sterling and his ex-girlfriend could be illegal — in California, both parties to a conversation must consent a conversation being taped — may empower Sterling to put up a fight. The NBA’s best hope is that an angel investor — hey, like this guy! — swoops in and makes Sterling an offer too good to refuse, and that Sterling comes to a common-sense conclusion: his days as an NBA owner appear numbered. 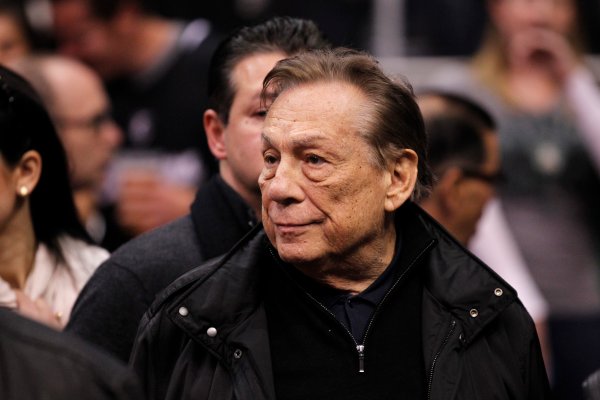