Former NBA player Magic Johnson attends a game between the Brooklyn Nets and the Miami Heat at Barclays Center on November 1, 2013 in the Brooklyn borough of New York City.
Jim McIsaac—Getty Images
By Eliana Dockterman

Magic Johnson is reportedly eager to purchase the Los Angeles Clippers, as the controversy deepens over an audio recording which purports to show current owner Donald Sterling making racist remarks to his girlfriend.

Yahoo Sports, citing anonymous sources, reported that Johnson and his investment backers the Guggenheim Partners are interested in purchasing the team. Johnson already co-owns the Los Angeles Dodgers with Mark Walter of the Guggenheim Partners. The group also purchased the WNBA team the Los Angeles Sparks in February when it was about to fold—possibly to win themselves favor with the NBA.

“This is 100 percent Magic’s plan,” an anonymous league official involved with the buying and selling of franchises told Yahoo Sports.

Johnson was directly referenced in the audio clip leaked by TMZ over the weekend. In the recording the man identified as Sterling admonishes his girlfriend for posting a photo of herself with the basketball legend to Instagram, saying she shouldn’t be promoting her associations with black people. On Sunday, Johnson said on TV that Sterling ought to lose his NBA team.

Johnson played 13 seasons with Los Angeles’ more storied basketball franchise, the Los Angeles Lakers. But a championship-winning coach in Doc Rivers and a run in the playoffs could sway Johnson to take on the Clippers. 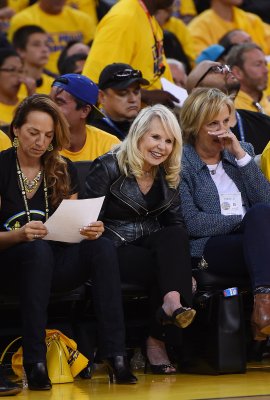