Not All Men: A Brief History of Every Dude's Favorite Argument

On April 10, artist Matt Lubchansky updated his popular webcomic series, Please Listen To Me, with a new comic called “Save Me.” It features a presumably mild-mannered fellow in a polo shirt who spots the “Man Signal” and barrels into a phone booth to emerge as a fedora-masked Not-All-Man, “defender of the defended” and “voice for the voiceful.” He catches the whiff of misandry in the air — a pink-haired woman in the middle of saying “I’m just sick of how men…” — and smashes through a plate-glass window to play devil’s advocate.

It’s a sharp, damning satire of a familiar kind of bad-faith argument, the one where a male interlocutor redirects a discussion about sexism, misogyny, rape culture, or women’s rights to instead be about how none of that is his fault. And it struck a nerve.

The comic was retweeted and reblogged tens of thousands of times. Nerd hero Wil Wheaton, comedian Paul F. Tompkins, and comics artist Matt Fraction were among its Tumblr boosters. Within a few days, science fiction writer John Scalzi, who frequently wades into feminist discussion, ranted about the “not all men” defense and followed up by posting the comic. Clearly, Not-All-Man is the antifeminist antihero for our times.

But his origin story is shrouded in mystery. Certainly Lubchansky’s comic was not the first humorous deployment of the term. For instance, two weeks before the comic came out, a “Not All Men” Tumblr made the rounds. It featured a handful of movie scenes enhanced with a “not all men” speech bubble — the shark from Jaws jumps in a boat to play devil’s advocate, the chestburster from Alien emerges from a man’s torso to explain that you’re overgeneralizing. And a few days before that, Twitter user @a_girl_irl posted an image of the Kool-Aid man crashing through the wall to deliver the catch phrase.

Before its meteoric rise as an object of mockery in the early parts of 2014, “not all men” had a past life as an object of frustration. For feminist bloggers it was a classic derail, a bad-faith argument used to shift the focus of a discussion instead of engaging with it.

But while it was clearly a source of irritation by mid-2013, and ripe for parody last month, “not all men” is curiously absent from earlier compilations of derailing arguments, including the ever-popular bingo cards that people who write about activist subjects on the Internet often make.

Of course, this doesn’t mean people weren’t not-all-menning it up before 2013. As early as 1985, author Joanna Russ expressed a familiar weariness in her feminist love story On Strike Against God:

But the absence of “not all men” on Internet bingo cards is a striking example of how the phrase, before it rocketed to prominence, went almost unnoticed in online arguments about activist subjects. If a feminist blogger made a derailment bingo card in April of 2013, “not all men” might be the free space in the center. But before last year, the place of prominence currently afforded to the phrase “not all men” was instead held by “what about the men?” and “patriarchy hurts men too” — pleas for inclusion, not for exemption.

Without the assistance of a trained Redditologist, it may not be possible to track down the source of this shift. Most likely “not all men” erupted in several places on the Internet simultaneously and independently, like the invention of calculus — an idea whose time had come. I asked Matt Lubchansky, the Not-All-Man comic’s creator, if he remembered where he first heard it; he told me that in his experience it arose from nowhere, or more accurately, from everywhere.

“I don’t recall a very specific instance so much as it was sort of everywhere, very suddenly!” Lubchansky wrote in an email. “But instead of this being something with a single origin, i think this phrase is unique among this kind of stuff because it was actually coming from the mouths of these dopes. Like some dummy would for REAL be coming at people talking about racial or gender equality stuff, waving their arms and saying ‘UM ACTUALLY NOT ME!’”

It’s true that previous derailment favorites like “patriarchy hurts men too” were paraphrases in a way that “not all men” is not. The demand is the same — “please move me to the center of your discussion” — but “not all men” is, in many cases, straight from the horse’s mouth; even an amateur Reddit spelunker can turn up plenty of sulky or defensive uses of the phrase.

“Not all men” also differs from “what about the men?” and other classic derails because it acknowledges that rape, sexism, and misogyny are real issues — just not, you know, real issues that the speaker is involved with in any way. The “not all men” man, at least in some cases, agrees with you and is perfectly willing to talk about how terrible those other guys are, just as soon as we get done establishing that he himself would never be such a cad. It’s infuriating and unhelpful, but in a way it represents a weird kind of progress.

Lubchansky agreed that the shift from “but what about men’s problems” to “not all men are like that” paralleled his own gradual development into a decent human. Perhaps men arguing on the Internet (though not all men!) follow a developmental path that echoes an individual man growing a social conscience, which in a very simplified form goes something like this:

Is it possible “not all men” rose to prominence when the level of online discourse moved from stage 2 to stage 3?

The Not-All-Man hero and his minions are paralyzingly obsessed with protecting their own self-concept, to a degree that prevents them from engaging in sincere discussion. But this contrast — between “not all men” and earlier derailing tactics — suggests that maybe they also represent a small and subtle shift towards good-faith argumentation.

Not all men will make that shift, ultimately. But some is better than none.

Write to Jess Zimmerman at metanarrative@gmail.com. 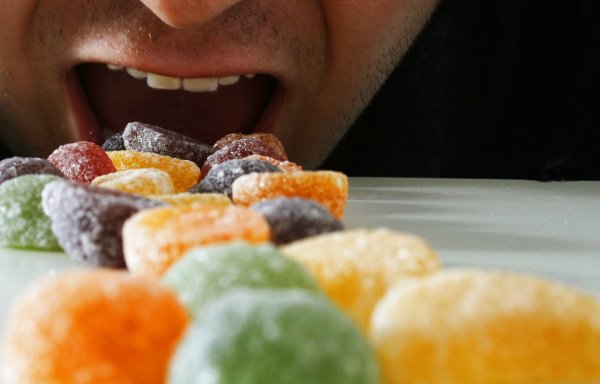 College Students Found a New, Better Way To Use Tinder
Next Up: Editor's Pick