Kids These Days Are Exposed to Less Violence

Mass shootings and severe cyberbullying cases have peppered the news over the past few years, suggesting that as a species, we’re getting more brutal, not less. But many researchers agree this is a common misconception. In actuality, violence is on the decline, and a new study published today in the journal JAMA Pediatrics finds that kids’ exposure to violence in particular has dropped significantly.

The researchers analyzed surveys of over 10,000 kids and caregivers in 2003, 2008 and 2011, and found that nationwide there were major drops in assaults involving weapons and injuries; assaults by peers and siblings; physical and emotional bullying; and sexual victimization. While acknowledging that it’s possible the children surveyed were not all entirely forthcoming — for kids under 10, the parent stayed on the phone during the conversation; the rest were passed the phone by a parent — researchers think that overall, respondents told the truth about their exposure to violence. “We probably have an undercount,” says study author David Finkelhor, director of the Crimes Against Children Research Center. “But the important thing for studying trends is that we have no reason to think that the undercounting is responsible for any of the trend findings.”

And the new results are consistent with other evidence that shows child maltreatment is dropping. The National Crime Victimization Survey, considered the nation’s premier source of information on criminal victimization, shows kids’ exposure to violent crime has fallen since 2008. Sexual abuse is also down, as are police reports of crime and homicide.

The researchers of the JAMA Pediatrics study have a few theories as to why. One is that the dissemination of violence prevention and intervention strategies, like school programs targeting bullying and dating violence, has been effective. Another, perhaps more surprising theory, is that the growing use of psychiatric medication among youth and adults has tamped down their aggression. And of course, there’s a theory that increased use of technology has resulted in less face-to-face violent confrontations.

There’s some contradictory evidence, though, too — for instance the data showing a rise in hospital-treated abusive-head-trauma cases from 2007 to 2009, and evidence that real-life bullying is still more prevalent than cyberbullying. “Claims by the media and researchers that cyberbullying has increased dramatically … are largely exaggerated,” researcher Dan Olweus, a psychologist at the University of Bergen, Norway, said in a statement.

Still, the researchers say that given their large population size and outside support, the data is convincing. They write, “It is important to buffer widely held assumptions (often derived from high-profile media stories, such as those on school shootings, Internet predators, or bullying-related suicides) that violence and abuse are on the rise, along with the facile blaming of easy targets, such as video games, the Internet, funding cutbacks, parental laxness, and insufficient criminal penalties.”

So while it can be hard to believe that we are living in a less violent time when tragedies like the Sandy Hook Elementary School shooting still occur, it may help to look to one of the most vocal advocates for the idea that societal violence as a whole is down. Steven Pinker, a well-known psychology professor at Harvard University, has mapped violence from biblical time to today, and he’s found that as a species, we are far less physically aggressive toward one another than we were in times previous. He says that “today, we are probably living in the most peaceful time of our species existence.” 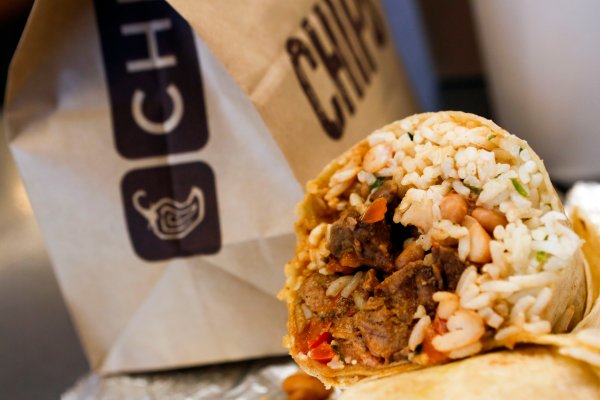 The Chaos Theory of Chipotle Burritos
Next Up: Editor's Pick