Can Cartoons Explain the Horror of North Korea to the Chinese?

The illustrations appeared late at night on the U.N.’s Weibo social-media account in China. Despite their cartoonish renderings, the drawings depicted the horrifying abuse used by a communist Asian regime to tame its populace. One image showed a supine man caged in a 100 by 120 cm cell, his hand outstretched toward a rat; another depicted weeping prisoners shackled to a wall with their arms pulled up behind them, forcing them into painful crouches. Still another, in a few spare lines, sketched emaciated prisoners pulling a cart filled with corpses, a uniformed man with a rifle behind them.

The drawings, which were based on the recollections of an escaped political prisoner, described life in North Korea’s vast network of gulags. They were posted on the U.N.’s Weibo account in conjunction with the Feb. 17 release of a report by the bloc’s Commission of Inquiry on Human Rights in North Korea. The report, 400 pages long with all its appendices and based on a year-long investigation, didn’t hold back. The U.N. panel accused Pyongyang of orchestrating a human-rights catastrophe “without any parallel in the contemporary world,” in which hundreds of thousands of North Koreans have been sent to their deaths in camps.

So how did Chinese — living in a country that has in its own history of human-rights abuses committed in the name of a twisted socialist ideology — react to the graphic drawings posted on Weibo? (The microblogging platform is popular in part because Twitter is blocked in China.) Opinion, as so often happens on social media, was divided. Some were horrified. “Such a garbage regime should be overthrown as soon as possible,” wrote one Weibo user. “Those people who are sympathetic to the regime should immigrate to North Korea.” China is, in fact, North Korea’s only patron — and the only force that might be able to single-handedly influence the behavior of its young leader, Kim Jong Un. “China is the key to solving the North Korea issue,” wrote another person, adding that “the North Korea issue has become a worldwide one and it serves as a trial on the morality and conscience of the human race.” One commenter even wrote: “North Korea is a mirror of China.”

But others on the leftist side of China’s political spectrum disparaged the U.N., its North Korea report and its Weibo posting. “You cannot convict someone just by cartoons,” wrote one Weibo user. “The U.N. should offer solid proof for their accusation, not just cartoons.” Opined another person: “These stupid public intellectuals actually believe cartoons drawn by the United Nations. The U.N.’s disinformation [campaign] has no bottom line.” Others wondered why Weibo was used to disseminate the illustrations. “Did the U.N. post these on other social networks or just on a Chinese platform,” questioned another Weibo user. “In terms of torture, there are so many cases of maltreatment of prisoners in America. Why doesn’t the U.N. criticize that?”

China’s opinion on North Korea matters. Beijing is Pyongyang’s only remaining protector, although an increasingly frustrated and worried one. The shocking recent execution of Jang Song Thaek — the uncle of North Korean dictator Kim, who promoted economic reforms championed by China — only heightened the sense of disconnect between China and its closed neighbor. Chairman Mao Zedong once described China and North Korea as enjoying relations as close as “teeth and lips.” Today, Chinese diplomats privately worry that they simply don’t know what’s happening in the Hermit Kingdom.

Visiting Beijing last week, U.S. Secretary of State John Kerry enthused that “China could not have been more emphatic or made it more clear that they will not allow a nuclear program [in North Korea] over the long run, that they believe deeply in denuclearization, that denuclearization must occur, that they are committed to doing their part to help make it happen, and that they also will not allow instability and war to break out in the region.” But that’s one specific issue: a nuclear North Korea.

Otherwise, Beijing has largely hewed to a script of defending its renegade neighbor. Case in point: The U.N. commission that released the Feb. 17 report recommended that the International Criminal Court in The Hague prosecute North Korea for its appalling human-rights. Theoretically, charges of crimes against humanity could even be slapped on Kim, who is the grandson of the founder of the communist North Korean regime. But no such international court case can happen without China’s support in the U.N. Security Council. In a letter published as part of the U.N. North Korea report’s documentation, a Chinese diplomatic representative in Geneva complained that Beijing had opposed the formation of the North Korea investigative commission, noting: “We will continue to strongly respond to the end to any attempt of regime change and pressure under the pretext of ‘human rights protection.’”

PHOTOS: David Guttenfelder Is TIME’s Pick for Instagram Photographer of the Year 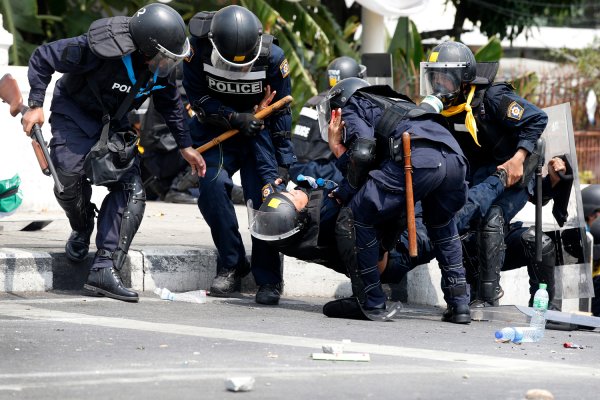 At Least Three Killed as Thai Police Swoop on Bangkok Protesters
Next Up: Editor's Pick