Thai police officers assist a colleague after an explosion during clashes with anti-government protesters near Government House in Bangkok Feb.18, 2014
Athit Perawongmetha—Reuters
By David Stout

Tensions on the streets of Bangkok boiled over Tuesday as police sought to disperse several protest camps in the capital, resulting in at least 57 people injured and the death of one officer and one protester. A third fatality has also been reported.

Tuesday’s violence erupted as the Thai police kicked off an operation to dismantle five protest camps established by the People’s Democratic Reform Committee (PDRC) at several key points in the city.

(MORE: The World’s Most Visited City Is Again Marred by Violent Protest: Here’s Why)

Earlier in the morning, the police were able to peacefully clear a site at the Energy Ministry where more than 140 protesters were arrested. However, more resistance was encountered downtown.

Guns and grenade launchers were reportedly brandished near Phan Fah bridge in front of Bangkok’s U.N. compound where protesters were massed. Shortly before noon, police deployed tear gas and rubber bullets to disperse the crowds, but were met with gunshots and grenades from beyond the barricades.

Erawan emergency medical services said a 52-year-old male civilian was killed by a wound to his head and a police officer died from a wound to his chest, reports the Associated Press. Another man also died but further details were not immediately divulged.

“This contradicts the pledges from [PDRC chief] Suthep [Thaugsuban] and other protest leaders that resistance to the government will be peaceful and unarmed,” he said. “Each time there was major confrontation, we see armed groups that operate in tandem with protesters.”

Protesters have taken to the streets of Bangkok for three months to demand that Prime Minister Yingluck Shinawatra resigns and certain reforms are instigated. They want to purge Thailand of the influence of her divisive brother, Thaksin Shinawatra, who they claim continues to run the country by proxy.

The boycott of snap elections called by Yingluck earlier this month by the opposition Democrat Party, combined with the blatant obstruction of the electoral process by their PDRC backers, has prevented a new government from forming and kept the country deadlocked in political crisis. 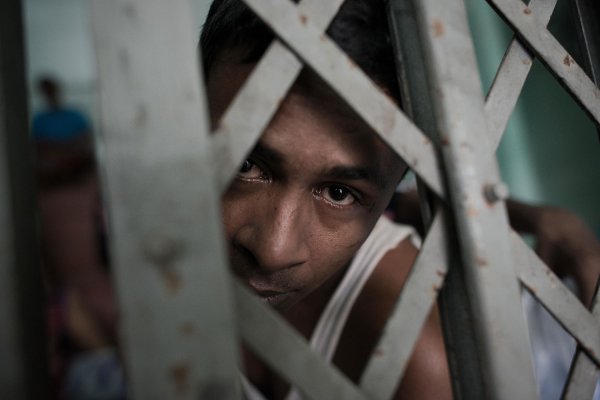 Thailand Sends 1,300 Rohingya Back to Hell
Next Up: Editor's Pick