A marine officer of the Cape Ray, a ship equipped to neutralize Syrian chemicals, shows a chemical protection suit to reporters during a tour around the ship docked at the naval base of Rota used by the U.S, in Spain’s southwestern coast on April 10, 2014.
Alfonso Perez—AP
By David Stout

The Syrian government has failed to meet a second deadline for ridding the country of deadly chemical weapons, as more than 7% of the regime’s illicit stockpile remains inside the country.

President Bashar Assad’s regime had first agreed to rid the country of its chemical weapons by February, but this was later pushed back to April 27. However, experts believe the government could still be days away from completing the task.

In Damascus over the weekend, representatives from the U.N. and the Organization for the Prohibition of Chemical Weapons implored government officials to abide by the terms of an initial agreement hammered out by the U.S. and Russia late last year.

“It is the Joint Mission’s hope and expectation that — having come this close to meeting the target date for the removal of chemicals weapons material — the Syrian Arab Republic will take the final step very soon,” Sigrid Kaag, the coordinator of the joint mission tasked with monitoring the mission, told reporters in Syria’s capital on Sunday.

Around 92.5% of Syria’s chemical weapons have been removed or destroyed inside the country, said Kaag, who pressed the government to eliminate the remainder of its stockpile by June 30.

The U.N.’s announcement follows reports earlier this month that forces loyal to Assad had deployed chlorine gas upon rebel-held villages. While chlorine was not specifically mentioned on the list of agents prohibited by the Chemical Weapons Convention treaty that Syria signed, Kaag called for steps to be taken in order establish the facts surrounding the “unsubstantiated allegations.” 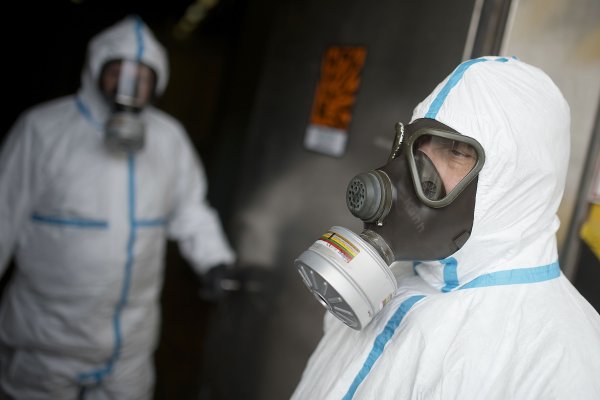 Most of Syria’s Chemical Arsenal Has Been Removed
Next Up: Editor's Pick