When detectives use DNA to crack a cold case, or when defense attorneys use it to free the wrongly convicted, the evidence itself can date back years—in some cases, to a time before DNA forensics had even been invented. No police officer imagined when they took hair or blood or tissue samples years ago that such tests would ever be invented.

Now something similar is happening in astronomy. A team of scientists from the Space Telescope Science Institute has re-analyzed old Hubble images with new software algorithms to reveal disks of dusty material around five young stars—an indirect hint that unseen planets are lurking there as well. “We had evidence that these disks might exist,” says Rémi Soummer, the institute astronomer who led the project, “but we had no idea about their size or structure.”

Some of that evidence dates all the way back to the early 1980s, when a satellite known as IRAS detected excess infrared radiation coming from a number of nearby stars. The best bet was that it was coming from orbiting dust particles, created when rocky asteroids smashed into each other—an early hint that the building blocks of planets were common around other stars. In 1984, astronomers using ground-based telescopes even managed to take images of a disk-shaped dust cloud swirling around the star Beta Pictoris.

But for more distant stars, it’s proven very tough to take images of dusty disks, even with the powerful Near Infrared Camera and Multi-Object Spectrometer (NICMOS), installed on Hubble during a 1997 shuttle mission. Like blood samples preserved in police evidence room, however, those images have been sitting in electronic storage in the Mikulsko Archive for Space Telescope database. (It’s named for Hubble-friendly Senator Barbara Mikulski, who represents Maryland, where the space telescope institute is located.)

In 2011, Soummer plunged back into that archive with a newly developed image-processing algorithm similar to those used in face-recognition software, and “discovered” three planets orbiting a star called HR 8799, about 130 light-years from Earth. The planets had already been found with ground-based telescopes between 2007 and 2010, but the pictures Soummer analyzed dated all the way back to 1998. (University of Montreal astronomer David Lafreniere found a fourth planet in the same system with similar image-processing techniques in 2009).

“It was great that we could see the planets in these old images,” Soummer says, but it was even better that they could now note the planets’ positions. Comparing them with the newer images, he says, “we could see a bit of orbital motion.” That’s crucial in understanding the dynamics of this distant solar system, but also in proving that the tiny dots of light hugging the star aren’t actually background stars that happen to lie along the same line of sight.

That success inspired Soummer and his colleagues to scrutinize archived NICMOS images of 400 additional stars. “Once we knew we could find planets that were already known,” he says, “we knew we could apply our technique to find entirely new stuff.”

They developed a new, faster algorithm, which turned out to be better at finding diffuse objects than it was at finding pointlike planets. They focused on stars that showed excess infrared light, figuring that this is where they’d likely find planet-forming dust disks—and ultimately, they discovered five, along with hints about their structure. In one case, the dust disk has a sharply defined inner edge, hinting at a still unseen planet “shepherding” the dust with its gravity. In another, the star in question, known as HD 141943, is an almost exact twin of our Sun. It’s only about 30 million years old, though, which puts it right at the age when the planets in our own Solar System formed. It’s like looking at a baby picture of the Sun and its newborn family.

And that’s just the start. “We’re only halfway through our observing program,” says Soummer. “We’re hoping to find new planets and new disks around many of these stars.” They’re also hoping to apply their algorithm to images from the James Webb Space Telescope, which will be far more powerful and sensitive than even the Hubble once it’s operational in 2018. The Webb has every prospect of revolutionizing scientists’ understanding of how planets form, around what kinds of stars, out of what raw materials—and unlike the Hubble, it presumably won’t have to leave its images sitting in an evidence locker, waiting for someone to figure out how to process them. 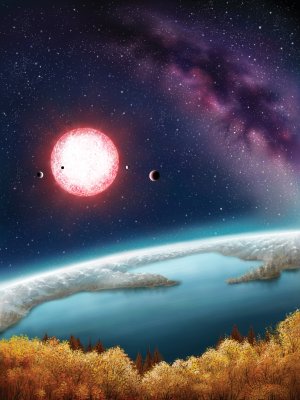 Another Earth? Satellite Makes Promising Find
Next Up: Editor's Pick