This upcoming Sunday’s canonizations of John XXIII and John Paul II by Pope Francis have been covered by the media in a somewhat predictable fashion. The exhausted narrative goes like this: in an attempt to please various political factions within the Church and society, the current bishop of Rome has made a politically savvy decision to proclaim both the ‘liberal’ John XXIII and the ‘conservative’ John Paul II saints.

To reduce the future saints to contemporary political labels both ignores the important nuances that defined their lives and distorts what Francis and the Church is doing in recognizing the saints that God has made in Angelo Giuseppe Roncalli and Karol Józef Wojtyła.

It’s important to remember that sanctity isn’t perfection. Every saint is also a sinner with a mix of virtues and vices. But in the saint, we can clearly see joy and holiness radiate through them. In their very lives, they communicate God to a skeptical world in a way many cannot. As Benedict XVI reminds us, the “[t]he saints were able to make the great journey of human existence in the way that Christ had done before them, because they were brimming with great hope.”

The particular sanctity of John XXIII and John Paul II is tied up intrinsically with the Second Vatican Council. In opening the Council in 1962, Pope John said he wanted to “throw open the doors of the Church and let the fresh air of the Spirit blow through.” If John opened the doors of the Church, then John Paul II was the one who most dramatically walked through those doors. During his 26-year pontificate, the first non-Italian pope since the Renaissance logged over 750,000 travel miles in 104 foreign trips, more than all previous popes combined.

By canonizing two of the most popular modern saints, Pope Francis is adding a newer element to the expectations of a saintly life: engagement with the world. This too is at the heart of Francis’s own identity. A member of the Society of Jesuit, Francis’s Jesuit order asks its men to “find God in all things.” One of the earliest leaders of the Jesuits, Father Jeromino Nadal said it well: “we are not monks; the world is our house!”

It’s clear: the two pope’s societal engagement—not supposed political ideologies—should be the markers of Sunday’s festivities. The Catholic Church of John XXIII, John Paul II and now of Francis is a Church that encounters the world. The opening lines to the Second Vatican Council’s most famous document communicates this reality: “[t]he joys and the hopes, the griefs and the anxieties of the men of this age, especially those who are poor or in any way afflicted, these are the joys and hopes, the griefs and anxieties of the followers of Christ.”

The modern saints will be men and women who exist in the gritty reality of life. Within the context of his humanity, they will have to communicate in both word and deed the timeless truths of the faith: that God never tires of loving his people, and that all men, women and children are redeemed and made holy by God’s love in Jesus Christ.

The canonization of two popes shouldn’t make us naïve us though. The call to holiness isn’t just for clergy. It’s universal. As Caryll Houselander put it: “when the years move on and we look back, we find that it is not the social reformer or the economist or even the church leader who has done tremendous things for the human race, but the silly saints in their rags and tatters, with their empty pockets and their impossible dreams.”

But perhaps more important than what the saints have accomplished is how they have woken us up from our slumbers. They open our eyes and remind us that Jesus Christ is all around us, only if we have the eyes to see him. Mostly we do not recognize him. We live our lives blind, numb to the reality that the Son of God comes to us a hundred times a day.

But as this great celebration of these two holy men approaches, the Church gives us a chance to reawaken ourselves during this Easter Season and sense again that God isn’t dead, but alive. He’s alive in our brothers and sisters and—yes—in our very flesh.

Now that is good news indeed.

Christopher Hale is a senior fellow at Catholics in Alliance for the Common Good.

Most Popular on TIME
1
Europe's Second Wave of COVID-19 Is Being Driven by Two Countries
2
Supreme Court Delivers Two Major Voting Victories to Democrats. But the Battle May Not Be Over
3
Taiwan Achieves Record 200 Days With No Local Virus Cases 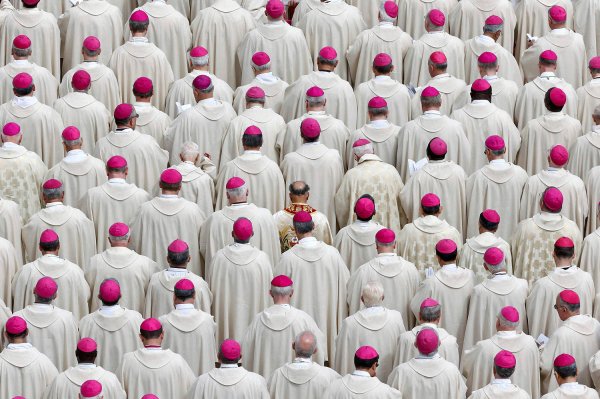 Thousands Gather for Canonization Mass
Next Up: Editor's Pick