Monty Python's London Reunion Coming To a Movie Theater Near You

The upcoming reunion of John Cleese, Terry Gilliam, Eric Idle, Terry Jones and Michael Palin — aka Monty Python — for a 10-night run in London’s O2 arena this summer is nothing short of a dream for fans of the beloved comedy group. Less exciting, however, is the likelihood of actually getting to see one of the shows — the first announced date sold out in less than a minute. It’s enough to make one’s brain hurt.

Turns out, the dream lives on: the comedy group’s final show on July 20 will be broadcast simultaneously to 450 movie theaters in the UK and another 1,500 around the world, reports The Guardian. Fans in the U.S., Australia, Sweden, Russia, Poland and more will all get a chance to see the remaining Pythons perform together for the last time.

The group last performed all together – along with their sixth original member, Graham Chapman, who died in 1989 – at the Hollywood Bowl in Los Angeles in 1980. Though they’re now one Python short, the remaining five released a statement about their upcoming show: 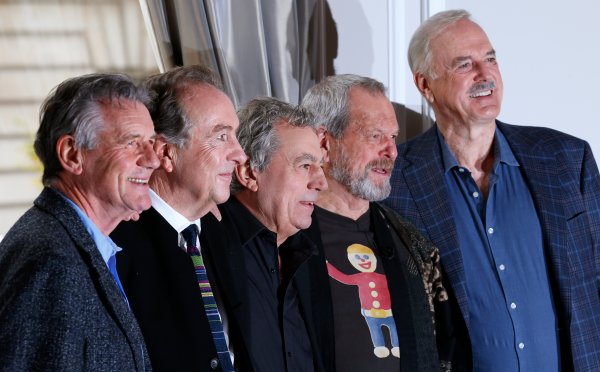 Monty Python Releases New Song and Plans for Last Show Ever
Next Up: Editor's Pick