The Vatican assured Catholics Thursday that Pope Francis’ private conversations will not become church policy after a phone conversation of his stirred controversy.

Pope Francis reportedly spoke on the phone to an Argentine woman who had written him for guidance. She said that her priest had not allowed her to take communion because her current husband’s previous marriage was never annulled. After the conversation, her husband, Julio Sabetta, claimed that the head of the Catholic Church told the woman she was free of sin.

“He said that she has been freed of all sin, that he blessed the whole family, that she’s free to take communion from here on out, and he asked that we pray for him,” Sabetta said, adding that after they hung up, the whole family hugged and wept together. “It was something amazing,” he said.

The account, which Sabetta posted on Facebook on April 21, led to speculation that the Pope wanted to changeVatican policy that currently prevent those who have remarried after getting divorced from access to the sacraments. This possibility was fueled by the fact that the pope has called a synod in October to discuss family issues, including contraception and divorce. The Vatican even sent out a questionnaire to all the world’s bishops asking for their input before the meeting.

But Vatican spokesman Rev. Federico Lombardi denied that there would be a change in policy, according to the Associated Press: “consequences related to the teaching of the Church are not to be inferred” from the pope’s private conversations.

“Several telephone calls have taken place in the context of Pope Francis’ personal pastoral relationships. Since they do not in any way form part of the Pope’s public activities, no information or comments are to be expected from the Holy See Press Office.” 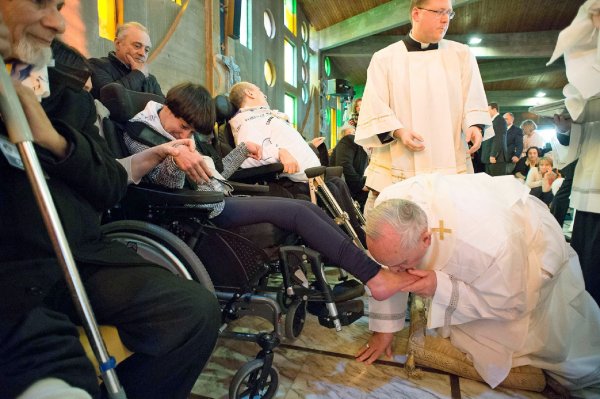 Pope Washes Feet of Elderly, Disabled in Ritual
Next Up: Editor's Pick