Tech Startup Amplifyd Seeks to Bring Lobbying to the People

Silicon Valley types have long dreamed of a way to hack the beast of bureaucratic dysfunction known as the U.S. government. Mark Zuckerberg honed in on immigration reform. Sean Parker invested in a mystery venture to attempt improving political engagement. And now a much smaller Bay Area startup with a snazzy name, Amplifyd, is launching with the lofty goal of providing “crowd-sourced lobbying” services to regular Americans.

At the core of the project is an untested idea that stretches the definition of lobbying: Provide an app that allows people to pay to create phone call petitions targeting state and federal legislators.

“We spend so much money trying to get politicians elected but there’s no real system that can effectively communicate our opinions as constituents,” said Amplifyd founder Scott Blankenship. At the same time, Blankenship says, business interests spend millions to influence politicians.

Beginning on June 3, Amplifyd hopes to change that imbalance that by allowing activist groups to initiate campaigns aimed at influencing elected officials with telephone campaigns. For around $7—the exact final price has not been determined—a Concerned Citizen can hire another person to call a member of Congress or a state legislator. Blankenship says about 1,000 people have signed up to be callers, with the promise of earning up to $30 per hour.

The script begins, “Hi, I’m calling on behalf of (name of the person who paid), and this call is being recorded so he can review the call later,” and continues with talking points, complaints, suggestions and the like. From the $7 Concerned Citizen paid for the call $1.50 goes to the campaign, between $2 and $3.50 goes to the caller and the remainder goes to Amplifyd.

Blankenship says he was inspired to build Amplifyd by his experience in the anti-water fluoridation movement, an issue he cared deeply about but didn’t have a lot of time to devote to. “There’s a of people like me who want to live in a society and community that matches what they want and their opinions on how things should be run but not necessarily wanting to sacrifice their family and goals and money to fight for that campaign,” he said.

It’s a business model that depends on people not wanting to make their own phone calls to express their opinions. The $7 price tag on a call could be seen as a high price for a service people can accomplish themselves by literally picking up the phone.

“It’s a mathematical estimate that considers variable calling expenses and payment/transfer fees, then broken out between us, the callers and the campaigners so that all groups are getting paid a decent amount for their efforts,” Blankenship told TIME. “If we can’t stay in the black, then we have failed our mission to provide this tool to our national community.” The price of calls will be reassessed after the product launch, he said.

But the $7 is far cheaper than professional lobbying, even as it shows little resemblance to the real thing. Sure, lobbying involves some working of the phones but as the term implies there’s a bit more to it than that. The lobbyist in its purest form is someone who hangs out in the lobbies outside the Senate and House chambers and corners legislators entering and leaving to make convincing arguments and, when the occasion calls for it, thinly veiled electoral threats. Of course, that doesn’t include all the influence peddled between K Street in Washington and golf courses near and far.

It’s also not strictly true that lobbying is unavailable to everyday Americans. Whether you’re a member of a labor union, a veteran, property owner, or a homeless person, someone in Washington on any given week is likely skulking around the Capitol building trying to convince members of Congress vote in your interest.

Amplifyd does raise interesting ideas about the future of political influence in the age of crowdsourcing. It’s not inconceivable that the site could collect payments from people and use them in a lump sum to hire a real lobbyist outfit, wing-tip shoes and all, on an ad-hoc basis, something that was not really possible before with the same efficiency. And rather than donating to a large organization representing an interest group, under Blankenship’s concept—we’ll call it the Kickstarterification of politics—a person can make more precise donations toward furthering specific causes they care about.

Blankenship says six activist groups are in line to start using Amplifyd when it goes live on June 3. Just how many people are in line to pay $7 so someone else will make a phone call for them remains unknown. 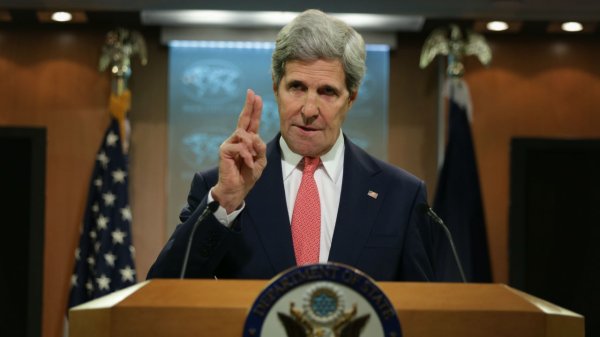 Kerry Warns Russia on Ukraine
Next Up: Editor's Pick