The TIME 100 is a list of the world’s most influential men and women, not its most powerful, though those are not mutually exclusive terms. Power, as we’ve seen this year, can be crude and implacable, from Vladimir Putin’s mugging of Crimea to North Korean dictator Kim Jong Un’s summary execution of his uncle and mentor Jang Song Thaek. Those men made our list, but they are the outliers, and not just because we generally seek to celebrate the best work of the human spirit. The vast majority of this year’s roster reveals that while power is certain, influence is subtle. Power is a tool, influence is a skill; one is a fist, the other a fingertip. You don’t lead by hitting people over the head, Dwight Eisenhower used to say. That’s “assault, not leadership.”

The 2014 list includes a record number of women: 41. It features people born on six continents, ranging in age from 16 to 78. We feature not just inventors but also reinventors, people who acquired expertise in one field and are now transplanting it to another. Microsoft mogul turned philanthropist Bill Gates (a four-time TIME 100 honoree) writes about the efforts of Nigerian billionaire Aliko Dangote to fight polio in Africa. Harvey Weinstein (TIME 100 2012) writes of actor Robert Redford’s influence over a generation of directors as the Sundance Film Festival marks its 30th year. On the court, Jason Collins is not a huge basketball star, but he has already claimed his place in civil rights history as the first openly gay athlete to play in one of the four major U.S. sports leagues.

In many cases, the profiles are less appraisals than appreciations, written by friends, admirers and mentors, which means this issue invites you to join the conversation. With an assist from the latest Supreme Court ruling on campaign finance, politically minded billionaires may wield more influence than ever—but that does not mean conservatives will embrace Al Gore’s tribute to Tom Steyer or liberals will love Karl Rove’s piece on the Brothers Koch. Readers can debate whether Edward Snowden is a hero or a traitor, whether Carl Icahn is a shareholder prophet or a corporate pest, whether Iranian President Hassan Rouhani is a force for change or a threat to peace, whether Miley Cyrus is a genius or a toxin, but it’s hard to deny the influence they have had.

To assemble the list, we rely on our journalists around the world and our TIME 100 alumni (many of whom are as influential as ever). Somehow, each year the group grows ever more interconnected: when we asked Colin Firth (2011) to write about Benedict Cumberbatch, his first reaction was to recall his early acting days when he worked with Cumberbatch’s parents. Gabrielle Giffords (2011 and 2013) wrote about Malala Yousafzai, who wrote about Hillary Clinton, who wrote about John Kerry. Both of last year’s breakthrough albums from Miley Cyrus and Beyoncé featured tracks produced by Pharrell Williams—who now has his own breakthrough album.

If there is a common theme in many of the tributes, it’s the eagerness to see what some engineer, actor, leader or athlete will do next. As much as this exercise chronicles the achievements of the past year, we also focus on figures whose influence is likely to grow, so we can look around the corner to see what is coming. So join us for this journey, and visit time.com/time100 to hear more of the story behind the stories. 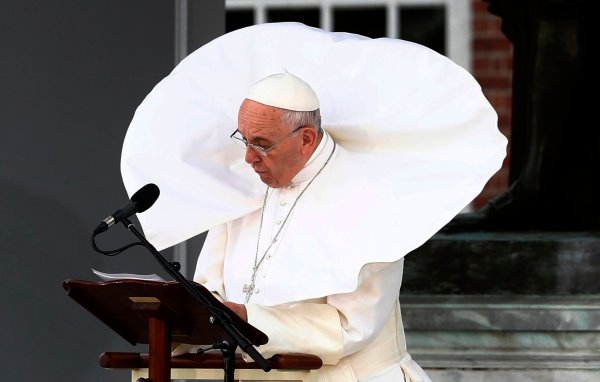 The Most Surprising Photos of Pope Francis
Next Up: Editor's Pick