Obama to Japan: Yes, the U.S. Will Defend You

Just how low would he go? In November 2009, as Barack Obama shook hands in Tokyo with Japan’s Emperor Akihito, the U.S. President bowed his head deeply in the Japanese tradition. The deferential greeting kicked up a minifirestorm back in the U.S., with right-wing Americans chastising Obama for somehow submitting to a foreign power.

On April 24, Obama, on an Asian tour that was delayed by last fall’s U.S. government shutdown, again met with Japan’s Emperor Akihito and Empress Michiko. No deep bows were in evidence this time. Instead, Obama used the morning meeting at Tokyo’s Imperial Palace for a little levity, joking that in the intervening four years, his hair had turned gray. “You have a very hard job,” the Emperor responded.

Obama is kicking off his four-nation Asia trip with a state visit to Japan, where he is underscoring the allies’ security ties and pushing for a trade pact that faces hurdles in both Washington and Tokyo. While the President will not stop in China this time around, Beijing’s growing regional footprint will surely be a matter of discussion in all the countries he will visit: Japan, South Korea, Malaysia and the Philippines. All of these nations are currently involved in territorial disputes with China, mostly over tiny uninhabited bits of rock in contested waters.

One of the conflicts involves islets in the East China Sea that Japan administers but to which China lays claim. Since the Japanese government nationalized some of the outcrops in 2012, maritime and aerial confrontations between Beijing and Tokyo have increased significantly. The U.S. says it does not take a stand on who actually owns the scattering of rocks, called the Senkaku in Japanese and the Diaoyu in Mandarin. But speaking alongside Japanese Prime Minister Shinzo Abe in Tokyo on Thursday, the U.S. President for the first time acknowledged in a press conference that the disputed islands are covered by the security treaty that commits the U.S. to defending Japan should it come under attack.

Japan’s postwar constitution, which was written by the occupying Americans, emphasizes a commitment to peace from a former imperial aggressor that marched across Asia during the first half of the last century. The charter precludes Japan from possessing a normal military, and it has never been amended — a rare, untouched document among democracies today.

The proudly patriotic Abe, who has a rare electoral mandate after the country cycled through six leaders in as many years, wants to change the constitution (or at least the interpretation of it) in order to enable the establishment of a more conventional army. Specifically, he wants to allow for what’s called “collective defense,” in which Japan can help defend an ally under attack, like a U.S. ship from a North Korean missile, for example. Local polls, however, show that many Japanese aren’t convinced by Abe’s wish for constitutional revision.

As the Pacific’s policeman, the U.S. has helped keep regional peace for decades. Obama has made clear his intentions to rebalance American foreign policy toward the Asia-Pacific. But with regional tensions increasing, amid China’s more assertive defense of its territorial claims, a little backup from an Asian ally wouldn’t be unwelcomed by America. Under Abe, Japan’s defense spending has begun to increase slightly after an 11-year lull. While Japan can only form a defensive armed forces, its military spending is the world’s sixth largest. In remarks before Abe and Obama’s bilateral meeting on Thursday morning, the Japanese Prime Minister noted that “the alliance between these two nations is indispensable and irreplaceable as the foundation for a peaceful and prosperous Asia-Pacific region.”

Two days before, another North American made headlines by visiting an altogether more controversial Shinto place of worship in Tokyo. Canadian pop star Justin Bieber posted pictures online of his stop at Yasukuni Shrine, where the souls of 2.5 million Japanese war dead are enshrined, among them top war criminals responsible for Japan’s military expansion across Asia. The Yasukuni complex also houses a war-history museum that downplays atrocities committed by Japanese soldiers. Bieber’s visit earned him the wrath of Chinese fans, and he quickly apologized for causing any offense.

In December, on the one-year anniversary of his latest stint as PM, Abe became the first Japanese leader since 2006 to visit Yasukuni. The pilgrimage earned him an expression of “disappointment” from the U.S. embassy in Tokyo. (At the Thursday press conference with Obama, Abe explained that his visit was to honor the war dead in general, not war criminals.) On April 22, one day before Obama arrived in Japan, nearly 150 Japanese legislators visited Yasukuni, spurring a furious response from Chinese and South Korean officials.

Emperor Akihito’s father Hirohito (known in Japan as the Showa Emperor) used to pay homage at Yasukuni. But he stopped visiting after 1978 when 14 top war criminals’ names were added to the shrine’s honor rolls. Emperor Akihito has not paid his respects at Yasukuni, either — a pointed absence by a figure venerated in state Shinto, a version of the faith that focuses heavily on imperial worship.

Obama will meet with Emperor Akihito two more times during his Japan visit, once at a Thursday dinner and another time at a farewell on Friday before the U.S. President heads to South Korea. It’s a pretty safe bet that Obama won’t be breaking out any low bows at either occasion. 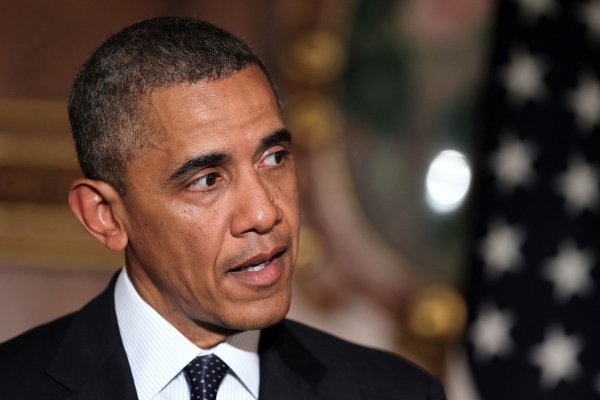 U.S.: Further Sanctions on Russia Are Possible
Next Up: Editor's Pick