Julia Louis-Dreyfus, Clown Sex and the Rise of Funny-Naked Women

The photo, which is part of a GQ magazine spread in their new “15 Funniest People Alive” issue, is just one in a series that tells the story of the Veep star meeting a clown, their night together, the morning after and the clown-baby who results. But, while the actress doesn’t play the sex scene for overt laughs, she’s the latest example of what’s a trend worth noting: funny-naked ladies.

Funny-naked dudes aren’t really that surprising. Jason Segel’s revelation that a naked breakup scene would be hilarious — the idea that led to 2008’s Forgetting Sarah Marshall — is mostly worth noting for the fact that he got away with full-frontal male nudity, not for the fact that he thought being naked in the scene would be funny. It was also a given that Segel would get to be the romantic lead of the movie, even though he invited audiences to laugh at his body earlier on.

Funny women have recently made inroads into joining Segel in being naked more — and, in doing so, lessening one particular type of inequality within comedy.

Lena Dunham’s Girls nudity is the most obvious example of funny-naked; as she told a journalist in January, it’s meant not to titillate but to mirror real life — and, as she showed during a Saturday Night Live appearance in March, she has a sense of humor about her own body. And speaking of SNL, the phenomenon was also on display in a nearly-nude photo spread for the May issue of Cosmopolitan, featuring the female cast-members making fun of the stereotypical “sexy slumber party” concept.

The reaction to the Cosmo shoot wasn’t all positive; to Refinery29.com, for example, the photos seemed like a reminder that being funny isn’t enough, that a woman has to be sexy to be worth the media’s time. That’s a fair point overall — but, in this particular case, the very idea that a woman can use her body and her sexuality for humorous purposes and get away with it is something to highlight.

As Linda Mizejewski points out in her new book Pretty/Funny: Women Comedians and Body Politics, which came out in March, women in mainstream comedy have long had to choose between being one or the other. Pretty women could be naked so that they could be looked upon. Funny women, meanwhile, kept their clothes on so nobody had to think about their bodies. Though the naked female body could be gross when it wasn’t desirable, that grossness was dirty and taboo, not funny; Mizejewski gives the example of Sarah Silverman’s recollection of what she was permitted to say on The Sarah Silverman Program: words for male genitalia were totally fine for jokes, while anatomical terms for women’s bodies were flagged by censors.

If you don’t believe it, ask Julia Louis-Dreyfus herself — or, rather, Elaine Benes. In the Seinfeld episode “The Apology,” Jerry’s new girlfriend Melissa walks around the apartment naked; at first he finds it titillating, but then he realizes that there’s “good naked” and “bad naked.”

It’s actually a pretty good early example of mainstream female funny-naked (the episode’s from 1997) but the characters on the show feel otherwise: Jerry is disturbed by the idea that Melissa, whom he likes to see naked only when she’s doing sexy things, might do other things with her body; Elaine discusses how the female body is “a work of art” while the male body is lumpy.

Now, in GQ, Louis-Dreyfus is demonstrating that that distinction is false, as Dunham and the women of SNL have shown. It’s possible for a woman to clearly traffic in mainstream sexiness — the actress’ pose leaves no doubt about that, and her body is conventionally pretty rather than funny — while still having a sense of humor. Today, there’s less of a distinction between which gender’s bodies get to be funny or pretty or sexy or gross or works of art; one of the realities that the nudity in Girls captures is that most human bodies don’t fall into just one of those categories. Just like Segel in Sarah Marshall, these funny-naked women invite viewers to laugh with them while they’re naked, and still to find them both desirable and funny. Segel will continue to spread that gospel this summer, but this time with a woman at his side: in interviews about their upcoming movie Sex Tape, Cameron Diaz has said that her role required lots of simulated nudity — at the same time that they were, in an apt turn of phrase, “laughing our asses off.” 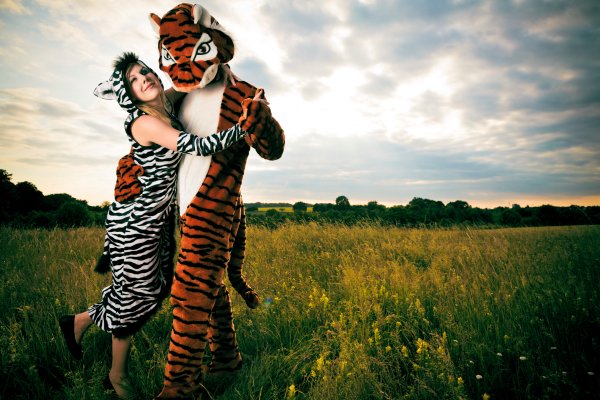 LoveRoom and Other Apps That Should Be Reality Shows
Next Up: Editor's Pick