A pro-Russia activist hangs a flag of the so-called "People's Republic of Donetsk" on the regional administration building seized by separatists as armed men in military fatigues guard the premises in the eastern Ukrainian city of Slavyansk on April 21, 2014.
Genya Savilov—AFP/Getty Images
By Matt McAllester

Pro-Russian separatist militia members in eastern Ukraine detained TIME’s Berlin Correspondent and four other journalists on Monday evening in an incident that highlighted the increasing number of threats to journalists working in the region. Four of the journalists, including the TIME correspondent, Simon Shuster, were released after about an hour but an American reporter for New York-based VICE News, Simon Ostrovsky, remains in custody.

The journalists were traveling in a car in the separatist-held town of Slavyansk when they were stopped at a checkpoint by armed separatists, said Shuster, who is now in the city of Donetsk. Shuster, a Ukrainian photographer and a British photojournalist for VICE left Slavyansk the morning after their detention. A Russian photographer who was part of the group chose to stay in Slavyansk.

In a statement released on Tuesday, VICE News said it was “in contact with the U.S. State Department and other appropriate government authorities to secure the safety and security of our friend and colleague, Simon Ostrovsky.”

A State Department spokeswoman, Jen Psaki, said in a statement today: “We are deeply concerned about the reports of a kidnapping of a U.S. citizen journalist in Slovyansk [sic], Ukraine, reportedly at the hands of pro-Russian separatists. We condemn any such actions, and all recent hostage takings in eastern Ukraine, which directly violate commitments made in the Geneva joint statement. We call on Russia to use its influence with these groups to secure the immediate and safe release of all hostages in eastern Ukraine. We have also raised our concerns with Ukrainian officials as they work with local authorities to try to de-escalate the security situation in and around Slovyansk.”

Stella Khorosheva, a spokeswoman for the separatists in Slavyansk, told the Associated Press that Ostrovsky is “with us. He’s fine.” She said that the journalist was “suspected of bad activities” and is under investigation.

In recent days at least three other foreign journalists – two Italians and one Belarusian – have been detained by armed separatists, whose political goal appears to be either to secure independence in eastern Ukraine or to persuade Russia to annex that part of Ukraine. Insurgents in Slavyansk are also holding a Ukrainian journalist and activist named Irma Krat.

“We’re doing absolutely everything we can to win Simon’s release,” said Shuster. “The people who are holding him assure us that he has not been harmed, but refuse to say when they would release him.” 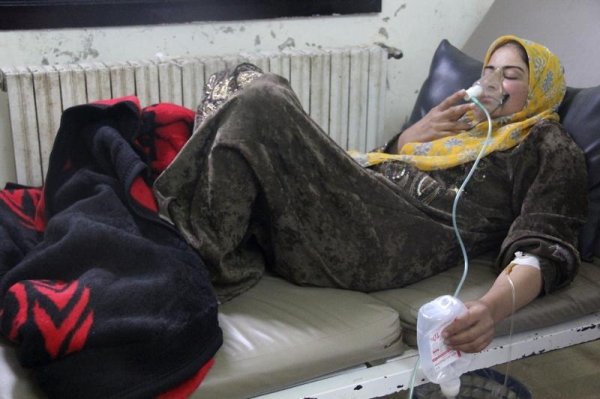 Syria Accused of Fresh Gas Attacks on Civilians
Next Up: Editor's Pick