For months, braving India’s hot summer, Maya Vishwakarma crisscrossed the dusty roads of Hoshangabad, her hometown in Madhya Pradesh, central India. As a candidate of the Aam Aadmi Party (AAP), she patiently went from door to door asking for people’s votes. But apart from her platform, there was something separating Vishwakarma from other candidates — and that’s her expatriate status. The U.S.-based Non-Resident Indian (NRIs, as they’re known) left her job in Silicon Valley — where she worked in developing leukemia vaccines and on bone-marrow gene therapy — and came home, motivated by the desire to make a difference.

“When I come home, I do not see any change,” Vishwakarma says. “No hospitals, no electricity, same roads, same schools. People are illiterate and there is widespread corruption.”

For Vishwakarma, the emergence of the fledgling AAP — an antigraft party running on a populist ticket — was the spur to leave behind the comforts of American life. She is far from alone. This year’s polls have galvanized NRIs like never before. Not content with discussing Indian politics around distant dining tables, thousands of NRIs are now on the ground in their homeland. Some have left their jobs, some are on sabbaticals or on leave without pay. But all are defying the heat and dust to campaign for what they believe.

“[We] are bound together with a desire to change the future of India and usher in clean politics and accountable governance,” says Shalini Gupta, a Chicago-based organization-development consultant, who left her job in the U.S. to become an AAP adviser. “[We] long to see India join the list of developed nations and for the development to benefit all segments of society and not just a select few.”

While India is yet to experiment with postal ballots or online voting, at 10 million people, the NRI community is a sizable vote bank. They’re also able to use their overseas experience to help modernize political parties and improve the way campaigning is conducted.

“As NRIs, it is very easy to sit and criticize constantly, talking about how bad the system is in India, how nothing changes,” says Smita Barooah, a Singapore-based therapist who is on a three-month sabbatical in Delhi campaigning for the Bharatiya Janata Party (BJP). “But one day I sat back and asked myself how I can change the system.”

Almost all the NRIs participating in this year’s polls would say the same. The U.S. chapter of the BJP reportedly has about 2 million volunteers and says more than 10,000 are now in India campaigning for the party. AAP says it has over 5,000 active volunteers in over 40 countries. In the U.S., there are supporter teams in at least 30 major cities and in over 40 major universities.

“This is a big election. India’s future is at stake,” says Pran Kurup, AAP’s U.S. spokesperson. “Our goal is to defeat candidates with criminal records, who are products of dynasty politics, who are proponents of communal politics, and those who are corrupt.”

While the emergence of AAP and its leader Arvind Kejriwal has inspired many NRIs, for others the BJP’s prime-ministerial candidate, Narendra Modi, is a huge draw. Business types, particularly, admire his track record in developing and governing the western state of Gujarat.

Deepak Kanth, a 35-year-old investment banker from London in charge of NRI engagement for the BJP, is inspired by Modi’s call for “minimum government, maximum governance.” He says Modi is an important catalyst for NRIs who are working hard to replicate on his behalf tactics from U.S. President Barack Obama’s first presidential campaign.

“It is very unusual that so many thousands are coming to campaign,” says Chandrakant Patel, president of the Overseas Friends of BJP and a U.S.-based businessman. “It points to concern among NRIs about India’s future and their faith in Modi as a strong leader who will be able to turn back India’s flailing fortunes and restart the growth story.”

However their political beliefs may differ, what unites NRIs is a sense of responsibility for the future of their country. “My boys are growing up, and I am keenly aware of the need for them to be proud of their country,” Barooah says. “I am an Indian no matter where I am, and I want my children to have that same sense of ownership about India.” 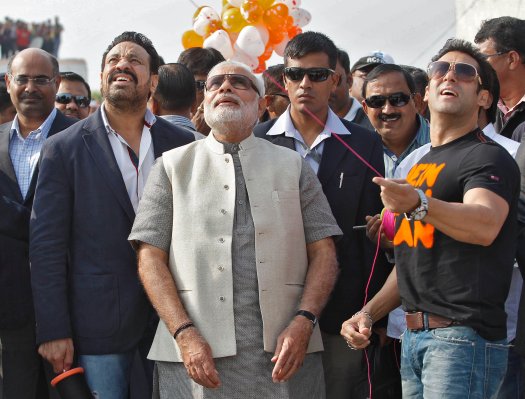 Modi Gets a Bollywood Boost
Next Up: Editor's Pick