Heeeeeere's Jimmy: Fallon Will Bring Carson's Magic Back to Tonight

The cast of iCarly and Jimmy Fallon in a cross over episode of iCarly.
Viacom International
By Dan Schneider

Jimmy Fallon becoming host of The Tonight Show is one of the greatest things to happen to television in a long time.

I’m not just psyched because it’s going to be a fun, entertaining TV show. I’m excited because I think Jimmy Fallon is going to bring America together again. That might sound a bit dramatic, but if you’re 35 or older, you probably know what I mean.

Johnny Carson, host of The Tonight Show from 1962 to 1992, was an entertainment hero of mine. I work with many young people, and some don’t even know the name Johnny Carson. That’s hard for me to fathom because, for much of my life, the name Johnny Carson – and Johnny’s face – were better-known to most people than the President of the United States. Presidents lasted 4 or 8 years. Johnny lasted 30.

Johnny made The Tonight Show an American institution. His opening monologue was, in a way, more important than the news itself. He not only talked about the most important events happening in America and the world; he used his humor to tell us why those events were funny, crazy, weird, or ironic. His jokes put the world into perspective.

His interview style set the benchmark, which has never been surpassed. Interviewing guests is one of the more difficult things to do well on television, but Johnny’s genius made it look effortless. No matter how big the celebrity Johnny was interviewing (he got the biggest and the best), Johnny had this gentle, easy way about him that made you feel as if you were watching two witty friends chatting over dinner. Maybe even more important than being funny, Johnny was always nice, pleasant, and classy.

After 30 years of bringing America together every night before bed, Johnny finally signed off The Tonight Show on May 22, 1992. That night, an important piece of American entertainment died, and it’s never been quite the same since.

I don’t mean to discount the talent and contributions of other great nighttime talk show hosts. David Letterman is another comedy hero of mine. In the 1980s, Letterman was as funny as it gets. I watched his show religiously – I loved it and learned from it. Dave broke new ground, and many comedy actors, writers, and stand-up comedians “borrow” from David Letterman to this day. And Jay Leno’s 22-year run on The Tonight Show has been impressive. (I went to a Jay Leno stand-up comedy concert at the Universal Amphitheater in 1988. I laughed so hard for two hours that my jaw was sore the next day.)

But Johnny Carson was one of a kind. When he left television in 1992, I never thought anyone would or could bring the magic, class, and warmth to The Tonight Show that Johnny did…until now. I think Jimmy Fallon can.

No doubt, much of my enthusiasm for Jimmy comes from meeting him personally, and working with him. That happened because of my friend Mike “Deetch” DiCenzo, an insanely talented comedy writer for Late Night With Jimmy Fallon (and now The Tonight Show). In the final season of my show iCarly (2012), I got an idea to do a crossover episode with the Jimmy Fallon show. I contacted my friend Deetch to get his opinion. Deetch took the idea to Jimmy and, soon, my producer and his producer were making production plans. Everyone at iCarly was pumped to be heading to New York to work with Jimmy and his team.

Until then, I’d never met Jimmy. I was excited to walk into his studio because I’m a big fan of his, and also because I knew it was where Johnny Carson had hosted The Tonight Show for his first 10 years, before he moved the show to Los Angeles.

I’ve met a lot of big stars. You never know what to expect. When I was first introduced to Jimmy Fallon, it took me about 5 seconds to know he was a friendly, genuine, warm-hearted guy who loves what he does.

That might not sound like a big deal. But trust me, not every TV star acts that way. After a few years of success and fame, stars often get jaded. They act like their work is a drag and seem annoyed to have to do it. I always feel bad for that kind of celebrity. It’s like their biggest dreams have come true, but they’ve forgotten to be excited about it. Jimmy’s the opposite.

When you show up on Jimmy’s set, he gives off vibes that say: “This is so cool. I’m so psyched you’re here!” and “This is gonna be amazing. Let’s make some awesome comedy!” He’s just as thrilled to have you there as you are to be there. That’s the way to make a great show.

I’ll never forget how Jimmy proudly showed me around his studio. As excited as I was to be standing there, in the same studio where Johnny Carson hosted The Tonight Show for his first 10 years, Jimmy seemed to be having just as much fun. He started telling me all about the studio as he showed me around, like we were 10-year-old boys and he was showing me his cool toys. I loved that Jimmy cared so much about the studio’s history, and Johnny Carson’s legacy.

While filming for the iCarly special, what impressed me most was how nice, friendly, and just plain fun Jimmy and his whole team are. They’re all there for the right reasons: to make a hilarious, entertaining TV show, and to have a great time while doing it.

Something else that tells you the kind of guy Jimmy is: One of the agreements my production team made with Jimmy’s was to finish filming by 11:00 PM every night. That was a very reasonable request since Jimmy had to go home, sleep, then prep again the next day for his own show.

The last night we filmed iCarly with Jimmy and his team, we were rushing to finish by 11:00 PM. We made it, but just barely—finishing exactly at eleven. The director asked me if I felt we needed to shoot anything else. I thought about it and couldn’t think of any shots we’d missed. So, I walked over to Jimmy and said, “Well, that’s it, I think we’re done.” Jimmy reacted like a little kid who was being told he had to stop playing and go to bed. Jimmy said, “What?! Dan, no way, come on! Let’s do another take! Let’s make it funnier!”

I’ll never forget that moment. Most entertainers as big as Jimmy Fallon would have been eager to walk out. Most would have been watching the clock and having his people “warn us” that we had only 5 minutes left before they pulled the plug. But he was having as much fun filming as we were. And like us, he didn’t want it to end. He just wanted it to be great. That’s so rare with big stars.

There are other reasons Jimmy is the only guy who can give the show the same kind of class and warmth that Johnny did. When you watch Jimmy Fallon, you get none of those “angry comedian” vibes. Even when he’s making fun of someone, it’s always with an attitude that lets you know he’s just kidding around. He entertains without negativity, just like Johnny did. And there’s a humbleness and sweetness to Jimmy’s comedy that makes you feel good. Again, much like Johnny Carson.

Add to the mix: Jimmy can sing; he’s a musician; he does hilarious celebrity impersonations; and he can do sketch comedy with the best.

Obviously, I can’t speak for Johnny Carson, but I have a feeling that Johnny would love Jimmy Fallon and be thrilled that he’s taking over The Tonight Show. 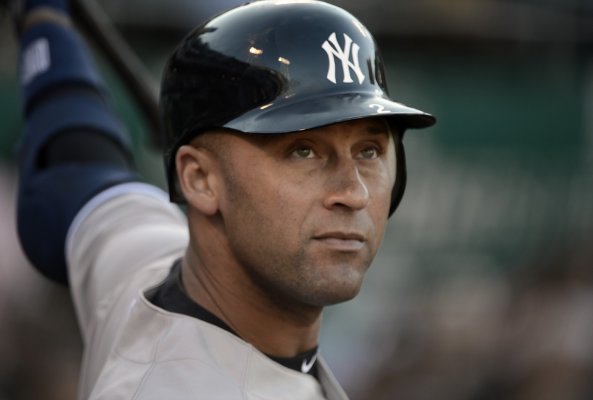 Derek Jeter Will Retire After 2014 Season
Next Up: Editor's Pick