How Skype Is Sabotaging Your Long Distance Relationship

Joaquin Phoenix talking to his iOS girlfriend Samantha in Her.
Warner Bros. Picture
By Eliana Dockterman

An hour into Her I was a mess. Though many have complained that they found it hard to empathize with the human-operating system relationship the movie depicts, I found the film all too real because it embodied the worst parts of a long distance relationship. From the little miscommunications that come from not being able to see your partner’s face to struggling to overcome the impossibility of physical intimacy to the panic that strikes when a call goes unanswered — they were all familiar problems.

So I couldn’t help but cry as I watched the movie while sitting next to my boyfriend who lives 2500 miles away from me. In an increasingly global job market, more relationships have to go the distance, but, friends assured me, it was easier than ever thanks to technology. Before he moved, we had joked that those iPhone commercials showing couples sharing intimate moments as they FaceTime from opposite ends of the world would be our lives. But after many months of anxiously glancing at my phone during work or dinners with friends to see if boyfriend was texting me, I realized that the devices and apps that were supposed to bring us closer together were actually driving us apart.

Of course there are ways technology has made long distance relationships much more manageable. I can call my boyfriend every day without having to worry about massive phone bills. When something good or bad happens at work, I can notify him immediately by texting him. I see a food truck we love by my apartment, I Snapchat it to him. If I want to see his face, we can use Skype or Google Hangout or FaceTime. If I want to know what articles he is reading, I can look at his Twitter. If I want know what the road trip he went on yesterday was like, I can stalk his Instagram. Soon, when he finally gets Spotify, he’ll be able to share playlists with me, and I’ll be able to spam him with Beyoncé songs.

We watch movies and TV shows together, messaging each other “I told you so” when a plot twist is revealed or our favorite emoticons when the guy ends up with the right girl. (We were watching episodes of Sports Night simultaneously long before the New York Times dubbed the practice sync-watching.)

It’s unimaginable to me that my dad had to sit by a landline waiting for my mother to call him at a specified time when they were dating long distance.

But my generation’s hyper-connectivity is a double-edged sword. Sometimes my boyfriend and I don’t know what to say to each other on the phone at the end of the night. He already knows the stories I’ve written that day because I’ve tweeted them. I know what new quote they posted on his quote board at work because it popped up on Facebook.

And the blurry, jerky, pausing unreality of video chat only makes you yearn for real-life interactions all the more. Video cameras and phones can’t always capture laughter, smirks or sighs of frustration. A joke becomes a fight because the tone of a text is misinterpreted. Long silences after arguments can’t be broken by reaching across the table and holding the person’s hand. And eventually you have to shut off the phone or computer and must confront the fact that you can’t feel his arm around you as you drift off to sleep.

So in some ways I envy my parents who were far enough away from one another to form separate lives. They didn’t feel guilty when they missed a text or let down when a Snapchat went unopened. Being so close digitally only widens the gap between my boyfriend and me.

And I’m not alone. Young couples are operating in a competitive, geographically diffuse job market that makes it hard to give up a good opportunity. A month before my boyfriend moved to the other side of the country, he rationally pointed out that this could happen to us at any point in our lives: one person has to move for a job, and the other person either has to stay put or go with him. For us, it was happening shortly after graduation from college, but for others a long distance separation could come years into a relationship or even a marriage. An estimated 75 percent of college students have engaged in a long distance love at one point or another, and about three million American adults in relationships live apart.

It’s one of the many reasons Americans are waiting longer to marry, according to research by Jeffrey Arnett, a professor of psychology at Clark University: men want a partnership with equals and therefore want women to pursue their own career goals. That unfortunately means more geographically-challenged relationships. And we’re not talking measly one-year separations. A recent Wall Street Journal article tells the tale of a couple that spent the better part of five years in a long distance relationship as they pursued their separate degrees and careers. They planned visits around their separate lives, probably in a Google Cal — another modern invention that’s made relationships simpler.

Luckily, it’s not all bad news. A study from Cornell published in June found that couples in long-distance relationships feel more intimate with their partners than those who live in the same area. They value what little time they have together — during visits or over the phone — so greatly that they optimize those moments emotionally. I find this is especially true towards the end of a visit when you want to savor every moment, memorize every freckle on the other person’s face — any memory you can cling to until the next visit. According to the study, long-distance lovers were also more accepting of their partners’ behaviors and felt more committed to each other.

The international job market will test more and more relationships in the years to come, so the information from the Cornell study is heartening. But the positive aspects of long-distance all seem to be based on how little couples see one another. If we reach a point, like in Her, where we can be connected to our partner at all times through an earpiece like the one Theodore Twombly wears or — more realistically — through messaging and social media, the benefits of being apart may be lost. Yes, demands at our respective work places keep us from emailing all day; but it’s easy to imagine that won’t always be the case as socializing online becomes easier to hide and young workers become more proficient at multi-tasking.

So before you become too connected to your long-distance lover, consider the value of space. The illusion of togetherness can be masochistic. Hold out for the real thing the next time he visits. Clichés exist for a reason, which is why I have “distance makes the heart grow fonder” written on a post-it in my desk. 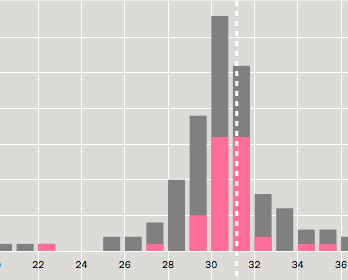 TIME Can Predict Your Perfect Marriage Date
Next Up: Editor's Pick