A Nepalese porter walks with his load from Everest base camp in Nepal on May 3, 2011
Laurence Tan—Reuters
By Michelle Arrouas

The Nepalese government has agreed in principle to meet the demands of the Sherpas set forth Monday, including setting up a relief fund for those injured or killed climbing in the Himalayas.

A government official told the New York Times that a relief fund would be financed by profits the Nepalese government makes from expeditions to Mount Everest. However, he did not specify the precise amount or functioning of the fund.

On Monday, hundreds of Sherpas threatened to cancel the spring climbing season if a list of 12 demands weren’t met by the government within one week.

They are demanding better compensation for the families of the 13 people confirmed killed in an avalanche on the world’s highest mountain last week. Three others are still missing and are unlikely to have survived.

The standard payment by the government is 40,000 rupees, or about $413, to each family, although they also receive around $10,000 from mandatory life-insurance policies. Sherpas also want improved working conditions, such as better pensions and educational assistance.

Tensions are also heating up on Mount Everest, where about 400 foreign climbers and an equal number of guides, as well as many more support staff, have been left in limbo pending the outcome of negotiations.

According to Tim Rippel, one of the expedition leaders currently on the mountain, “things are getting very complicated and there is a lot of tension here and it’s growing.”

“The Sherpa guides are heating up, emotions are running wild and demands are being made to the government to share the wealth with the Sherpa people,” he wrote in a blog post from base camp.

The Nepalese government has said it will negotiate the demands with Sherpa representatives in meetings Tuesday. However, it remains unclear if original demands for around $100,000 per individual killed or disabled could be met by the impoverished nation’s government. 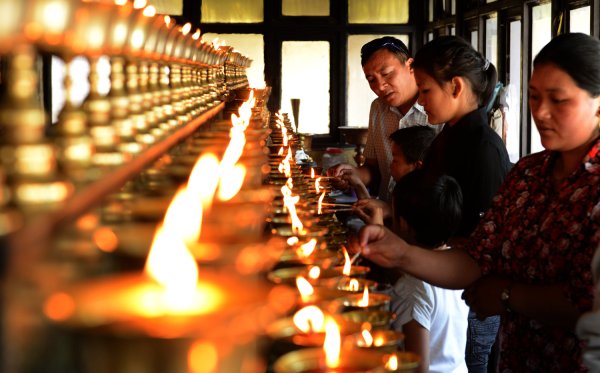