President Vladimir Putin at a meeting of the State Council at the Kremlin in Moscow, on April 21, 2014.
Alexey Druzhinin—RIA-NOVOSTI/AFP/Getty Images
By David Stout and Denver Nicks

Vice President Joe Biden in a visit to Kiev urged policymakers Tuesday to remove the “cancer of corruption” from Ukrainian society as the White House warned Russian President Vladimir Putin that time is running short for Moscow to rein in pro-Russian separatists in accordance with an agreement struck last week.

“The opportunity to generate a united Ukraine, getting it right, is within your grasp. And we want to be your partner and friend in the project. We want to assist,” Biden said. “You have to fight the cancer of corruption that is endemic in your system right now,” Biden said in a meeting with nine members of the Rada, Ukraine’s parliament. He urged the legislators to enact meaningful constitutional reforms and offered Washington’s assistance as the country prepares for national elections on May 25. Biden met earlier in the day with Ukrainian President Oleksandr Turchynov to discuss economic and technical assistance amid the ongoing crisis sparked by last month’s occupation and annexation of Crimea. He landed in Kiev on Monday.

In a briefing in Washington on Monday, White House Press Secretary Jay Carney said Moscow could face further sanctions if it doesn’t pull back Kremlin-backed insurgents occupying government buildings throughout the country’s restive east. “If there is not progress within days, we remain prepared, along with our European and G-7 partners, to impose additional costs on Russia for its destabilizing actions,” he said.

During a question-and-answer session on Twitter, U.S. State Department spokesperson Jen Psaki appeared to up the ante when she conceded that the U.S. government would consider levying further sanctions against the Russian leadership, including measures targeting Putin personally, if efforts to de-escalate the crisis in Ukraine failed.

“Yes. [Important] to lay out consequences. U.S. able to sanction people, companies, and sectors. Goal not sanctions. Goal de-escalation,” tweeted Psaki. “Range of officials under consideration. Plenty to sanction before we would discuss President #Putin.”

According to the deal reached in Switzerland on Friday between the U.S., Russia, the E.U. and Ukraine, “all illegal armed groups must be disarmed, all illegally seized buildings must be returned to legitimate owners.”

In the four days since, pro-Russian forces have shown few signs of acknowledging the Geneva agreement.

While many of the protesters camped out at government buildings throughout eastern Ukraine are locals, analysts and the U.S. government increasingly agree they are being supported by Russian special forces.

In Moscow on Monday, Russian Foreign Minister Sergei Lavrov dismissed the use of ultimatums by U.S. officials and accused Washington of colluding with fascist elements in Ukraine.

“Before giving us ultimatums, demanding that we fulfill demands within two or three days with the threat of sanctions, we would urgently call on our American partners to fully accept responsibility for those who they brought to power,” said Lavrov, according to Russia Today.

Tensions in eastern Ukraine remain high in the wake of a deadly shoot-out in Slavyansk on Sunday night between progovernment and separatist forces. Reports also surfaced that separatist groups had detained at least three foreign journalists in the city on Monday.

This article was updated with comments from Vice President Joe Biden in Kiev. 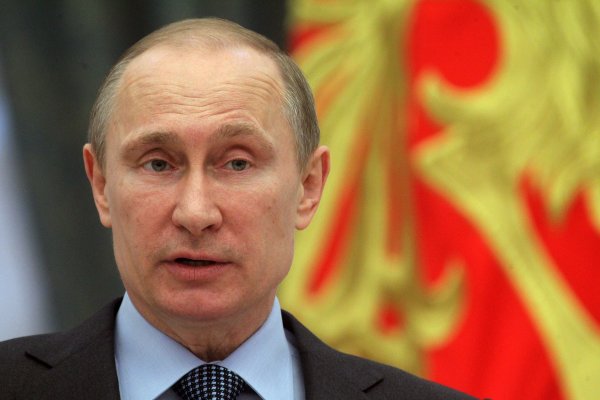 Obama: Troops Must Back Off
Next Up: Editor's Pick