A series of funerals were held on Tuesday morning for victims of the ill-fated ferry that sank off South Korea’s coast six days earlier, as the death toll surpassed 150.

The number of deaths from the Sewol has rapidly increased since divers found additional paths to enter the submerged vessel and took advantage of the neap tide, with dozens of bodies recovered on Tuesday and 28 the day before. The majority of the 376 passengers on board were high school students going on a field trip to the resort island of Jeju. Over a hundred passengers remain missing.

“The conditions are so bad, my heart aches,” rescue diver Bard Yoon told CNN. “We’re going in thinking there may be survivors. When we have to come back with nothing, we can’t even face the families.”

The incident is the worst maritime disaster in the country since 1993 and has stirred outrage among relatives, who have lashed out against the government for not managing to rescue more than 174 people.

South Korean authorities broadened their investigation on Monday as they arrested four additional crew members and barred the family who owns the ferry’s operating company from leaving the country.

“The measure is to question them and hold them responsible for the poor management of the vessel,” a prosecution official told the nation’s Yonhap News Agency.

An extra deck was added to the 20-year-old ferry after the company acquired it in 2012, raising questions about how well balanced the modifications made it.

The ferry’s captain and two crew members have already been charged with negligence of duty and violating maritime law after abandoning the ship without efficiently helping passengers, an act labeled “unforgivable” and “murderous” by President Park Geun-hye on Monday.

According to the Korea Herald, the captain is likely to face a life sentence in prison. On Monday a chief engineer on board attempted suicide but is reportedly in stable condition and will soon be summoned for further questioning.

Not all crew members are accused of wrongdoing, though. Some reportedly gave their life jackets to passengers, and one woman refused to leave before helping students off the ship. She was later found dead, becoming one of at least seven crew members who lost their lives or are still missing. 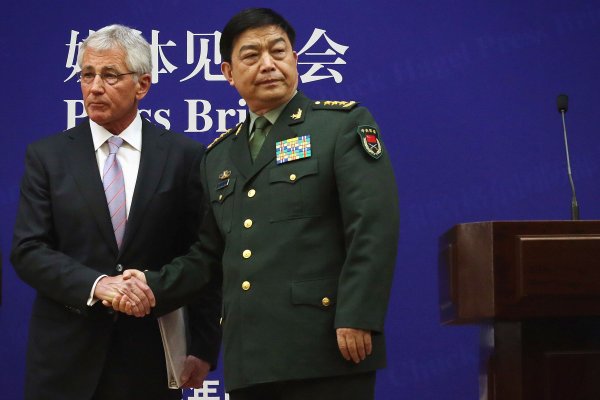 U.S. and China Lock Horns Over Disputed Islands
Next Up: Editor's Pick