Rarely does a public servant confront a more perilous test than throwing the first pitch at a nationally broadcast baseball game. The rewards of success are modest, and the price of failure—an indelible record of your public humiliation etched for all time on YouTube—can be incalculable.

But U.S. Secretary of Energy and rabid Red Sox fan Ernest Moniz can’t wait. On Tuesday, in celebration of Earth Day, he will toss out the first pitch when the Red Sox meet the Yankees at Boston’s Fenway Park. He has been throwing practice pitches in two states to prepare. “Outside the Department of Energy,” he says. “And on Saturday in Brookline, Massachusetts. So that got me within like one mile of Fenway Park.”

The day before his big moment, Moniz spent a few minutes chatting with TIME about his favorite players (retired), his pitching training regimen (impressive for a technocrat, though not exactly rigorous) and his thoughts on the introduction of instant replay in baseball (remarkably even-handed for a sports fanatic).

He also dished about the potential for liquefied natural gas to shake up America’s geopolitical position vis-à-vis Russia, the status of the Keystone XL oil pipeline, and life as the man designated to live on and lead the American republic in the event of a complete disaster at the State of the Union address.

TIME: Thanks for taking a few minutes to talk.

Well that’s my understanding, that (Environmental Protection Agency chief) Gina McCarthy and I will be throwing out the first climate pitches on Earth Day.

Have you been practicing?

Are you being coached by professionals?

No, they didn’t so characterize themselves, as pitching coaches. I could not recognize any, uh, trait.

As a baseball fan—thoughts on instant replay?

I got to say, so far the Red Sox seem to have gotten the short end on a couple of calls. But I don’t know, we’ll see. I’m sure the kinks will get worked out. I have to say, I’m kind of a traditionalist and I don’t mind the human element, but I would say in football it’s actually made a positive difference.

Predictions about the season? What teams are looking good? Who’s your favorite player?

Well I’m a Red Sox fan, so…. As far as my favorite player on the Red Sox today, I would say Dustin Pedroia. All time? Boy. Well, of course when I grew up Ted Williams was a player and as far as a hitter it’s hard to top that. As a pitcher it’s a tough call but probably I’ll come down on Luis Tiant and his great 1970s seasons. And his great delivery. “El Tiante.”

There’s been a lot of talk about liquefied natural gas (LNG) and the hope that the U.S. can undermine some of Russia’s power by ramping up exports. Is that logistically feasible, considering the timeline and high capital costs involved?

The U.S. shale gas revolution has already had an impact on global LNG flows by our not importing. A lot of cargoes that were originally planned to go to the U.S. went to Europe, for example. If you look at the final and conditional approvals (to export LNG) that they’ve given so far it’s nearly equal to what Qatar exports today in LNG and they are by far the largest exporter in the world. So it’s not like the amount that would be approved is particularly small. Regarding European countries, it raises a very important point that we do not determine where the cargoes go, the licensee does. So whether those cargoes go to Europe or, say, to Japan, where the price is substantially higher, those are purely commercial decisions. Of course, getting more gas exported does put more gas into the market and that has implications for everyone.

Can you tell us anything about how you spent your evening as the designated survivor during the State of the Union?

Yes. So, basically, it’s a very small group, in our case from the agency and obviously the Secret Service and others. All I can say is we’re kept very securely obviously away from central DC and we have excellent communications should they be required. And that’s really as far as we can go. Other than that we had a steak dinner as we watched the State of the Union speech.

Can you offer insight on when we might expect DOE to weigh in on the Keystone XL environmental impact review?

As you know you we were preparing comments for the 90 day period. That started off, but obviously that’s now on hold in light of the Nebraska decision. So, I’m assuming that the appropriate thing would be for us to wait until the schedule for the comments is reset.

The interview has been lightly edited for length and clarity. 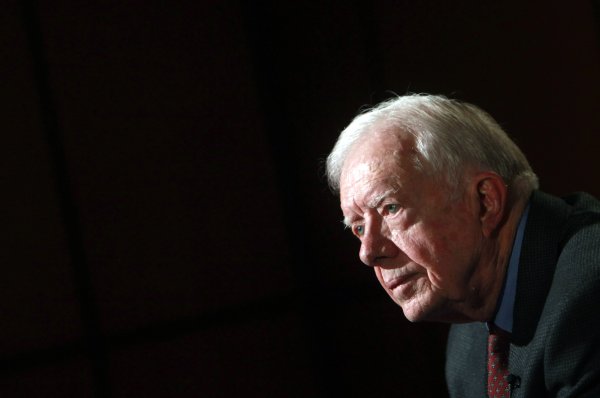 Carter Dishes on Iran, Jesus and Bush's Art
Next Up: Editor's Pick