Let’s be up front here: Your name is not Johnny Walker. Why do you use a fake name?

Most of my missions with the SEALs were secret. So as part of safety, I use a different name so no one can target me.

You were an interpreter with the SEALs during the Iraq War. How did you get that job?

At the beginning [of the war] I tried to find any job with the Americans but couldn’t. Then one day there is some kind of issue between some women and the U.S. military police, and I fixed it. I get job with the military police. At that time, there are no extremists, only thugs, people stealing stuff. Everyone hear about my name on the base, and the SEALs want me. The mission changed to targeting the extremists.

Part of your job was making sure you got the right guy. What were your techniques?

Sometimes we had IDs or papers I could read. But most of the time we don’t have enough information about the target. Sometimes I asked the kids, “Hey, is that your dad? What’s his name?” Different technique every mission.

I don’t care. I saved a lot of innocent Iraqi people’s lives. And maybe I give them reason to have good life.

Do you feel like your work cost your brother his life?

It was worth it, because if we just surrender to the extremists, to the mujahedin, who’s going to fight them? And freedom is not going to come free. We have to pay something. I was prepared to give my life.

How did you lose your teeth?

I always sit at the back-backseat because I cannot breathe inside the humvees. I don’t know why, some psychology things. The driver hit a barrier and I find myself in the ditch with no front teeth and my lips is cut, have broken shoulder, broken ribs.

You can get them fixed, you know.

The SEALs, they hook me up with teeth, but every time I put them in, it look like something weird. And you know what? I love it. It remind me always what I did.

Are you optimistic about the future of Iraq?

It’s going to take time. Because right now what happen in Iraq is corruption and extremists. Corruption is going to destroy the country, and extremists, they destroy everything. I think the troops should have extended their time. The United States built a dream in Iraq, and they sacrificed money and lives. And suddenly we just left, you know?

You’re a Sunni. Your wife is Shi’ite. Did that make things easier or more complicated?

When I married my wife in 1990, there is not that huge difference between Sunni and Shi’ite. I asked my kids one day, “We can make vote. We are democracy family. So who wants to be Sunni and who wants to be Shi’ite? I’m Sunni. Mom, Shi’ite.” All of them says, “We are Shi’ite.”

What was the most extreme thing you had to do to protect your identity?

One time I’m driving to the base, and there is red car behind me. SEALs teach me, Don’t trust anyone outside your team and always take the worst scenario. So I plan: I’ll push the gas and then hit the brake. If they are normal people, nothing will happen. If not, I will defend myself. Happen exactly as I thought, and I still remember 9-mm pistol they shot at me with. They hit the metal between the two windows. I stopped, I took my AK, get out from the car and I start to shoot those guys. People came [after I killed them], and I told them [the attackers] work with Americans.

SEALs say the F word a lot. Is there an Arabic translation for that?

No. When I speak in Arabic, I use the English version. Everybody understand it. 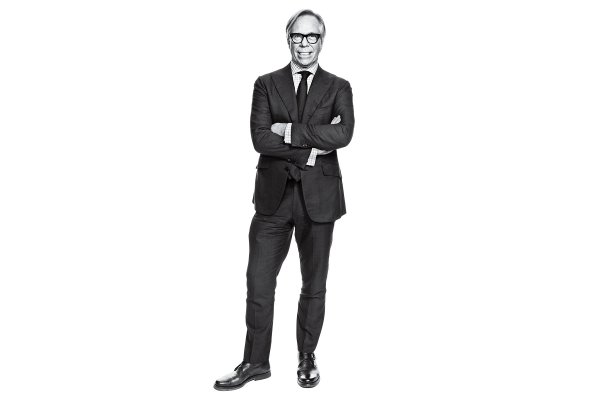 10 Questions with Tommy Hilfiger
Next Up: Editor's Pick